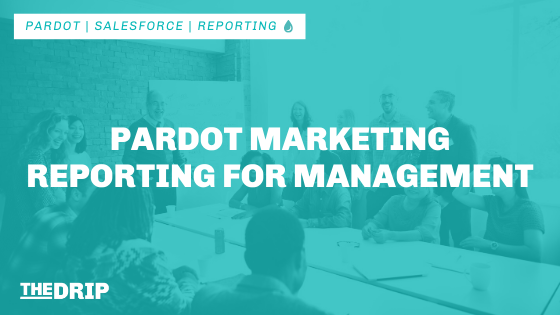 Marketers have a tough time proving their campaigns have influence on the sales pipeline, let alone proving the return on investment (ROI) of their efforts. The link between opportunities and campaigns can be tenuous because ‘influence’ can be challenged – the length of time between the Prospect interaction and the opportunity, the quality of the marketing touchpoint with the Prospect, plus, the influence of other factors in the mix, classically sales rep calls and meetings cited as ’sealing the deal’ or ‘getting it over the line’.

This gets tougher when showcasing what you have achieved to senior management or The Board. This audience doesn’t care for email opens and clicks, event attendees, or webinar registrations. Although ‘Campaign Influence’ is an obvious answer that springs to mind, this group may not find the figures credible (maybe for the reasons listed above). What should you do in this situation? What other metrics, reports, or tactics could you add to your marketing presentations?

As I mentioned in the introduction, Campaign Influence is the obvious answer that springs to mind. Although management not working so closely with Marketing may not find the figures credible, I believe that Campaign Influence still has a seat at the table when deconstructed, explained and caveated in the correct way.

Deconstructing Campaign Influence is explaining that one opportunity can be influenced by many campaigns, and one campaign can influence many opportunities.

This is a many-to-many relationship (in Salesforce-jargon, ‘Campaign Influence’ is a Junction Object).

The easiest way I find to show this is by displaying Salesforce Campaign Influence reports as crude tables in a dashboard, like below:

Caveats are important to engage stakeholders in the conversation – Campaign Influence will never be 100% accurate, just as we can’t capture and quantify every single moment of intent and aspect of human decision making. There are two caveats up for discussion:

Pipeline velocity refers to the speed at which an opportunity or a lead progresses through the pipeline stages, for example from ‘Contacted’ to ‘Converted’, or from ‘Proposal/Price Quote’ to ’Negotiation/Review’.

Velocity can be calculated using date fields and formula fields (or row-level summary formulas in reports) – this article will give you a starting point. Show the comparison between a lead who marketing has engaged with versus a lead that marketing hasn’t engaged with.

A good indication is Prospect Score, as the higher the score the more marketing content that prospect has interacted with. As Score is often not a perfect picture in organisations, another example could be comparing the velocity of Prospects in multiple marketing campaigns vs. Prospects in none. Hopefully, what you will see is either:

Don’t forget to extend this analysis to the opportunity funnel too!

Marketing is often ridiculed as a function for being too ‘fluffy’, with an outdated reputation that marketers grab leads that happen to bite the bait from a widely cast net. ABM puts a stop to these ’spray and pray’ approaches and gives legitimacy to marketing plans by showing a thoughtful and targeted approach to engaging Prospects.

Often the target accounts list is decided upon by the Sales Director, and then passed down to the marketing team.

Once you have decided on your target job titles, or seniority and function, then you are ready to re-configure your org for ABM. There are clever ways your Admin can configure Salesforce Accounts to visually map coverage by job role, or to identify ‘whitespace’.

As part of the Spring ’20 release, the Engagement History Dashboard on Campaigns will now include account engagement. Based on which leads and contacts are associated to your campaign as Campaign Members, the chart totals up those activities, and splits them by account (or company, as according to the notes, this is including both leads and contacts).

Also (a bonus!) behind the scenes, there are now stronger data relationships between accounts and campaigns. Related lists will show:

Aside from all these new features, how about you revisit good ol’ fashioned Prospect Grading? By setting up your Grading model to favour Prospects with job titles that fit your ideal customer profile, you can quickly separate out ‘A Grade’ Leads from the less relevant. Use a blended scoring and grading model to prove that marketing efforts are getting your organisation in front of these target buyers.

When this topic came up on the Pardot Trailblazer Community Group, call abandonment was one suggested approach.

Business Development Reps calling long lists of leads all day can bring results, but it is expensive (BDR time, data acquisition costs) and becoming increasingly ineffective.  If BDRs cannot work through the entire call list, or give up after a single attempt, then there’s money leaking out of the business.

Marketing can step in to take over using email, after one unsuccessful call attempt. It would be interesting to measure the % of 2nd call success after marketing intervention compared to the period before the nurture initiative.

Similarly to improving call abandonment rates at the top of the lead lifecycle, marketing can have an impact on the other end.

Recycling campaigns can add Prospects to a nurturing program via Engagement Studio for a few scenarios including (but not limited to): disqualified leads, lost opportunities, dormant opportunities.

The impact of these campaigns are particularly lucrative for marketing if these Leads/Opportunities are no longer being actively pursued by the Sales team. Sometimes it’s a matter of timing, that a Prospect isn’t ready just yet. Marketing can potentially scoop up ‘low hanging fruit’, while sales will be glad to shed the ‘dead weight’ from their pipeline.

I plan to write more on Recycling Campaigns with Pardot, especially how to run one that will only include Leads with promise, and not dredge up things that shouldn’t be!

This post has included some ideas I have come across in my time as a Salesforce and Pardot Consultant, helping marketers showcase the results of their marketing efforts in a more impactful/imaginative way for a management-level audience. I hope this has given you some ideas to experiment with – you may be surprised what you uncover when reporting on your data in alternative ways!

I plan to eventually write deeper dives on each of the above ideas, but I would love to hear your thoughts on which ones should be prioritised first!