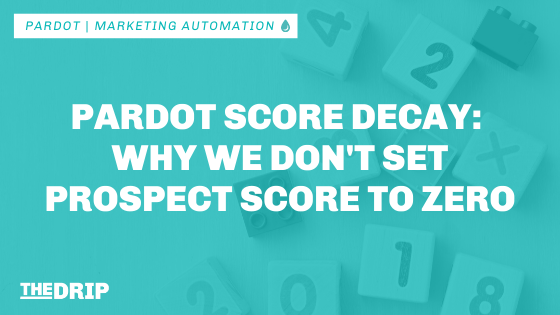 Lydia Fine is a Certified Pardot Specialist, higher-ed marketer, and CRM evangelist. Officially, she's the martech owner at the University of Iowa's Tippie College of Business.

Score decay involves decreasing Pardot scores over time as a prospect stays silent, going longer without any activity. Pardot doesn’t come with score decay out-of-the-box. If you want your scores to decrease with inactivity, you need to set up this automation on your own. This why score decay made it on the list of key marketing automation workflows to build in Pardot.

That’s good news, because every org is different. Full freedom means you can decay prospect scores exactly as you need to. For example, if an organization has a shorter sales cycle, they may choose to decay scores after 30 days of inactivity, while longer selling cycles might mean a 12 month delay before any prospect score decay happens. You do you, my friend.

In this post, I’m going to share some good advice I once got about score decay, how to set up prospect score decay, and some ways you could extend the automation to make it your own.

How we Decay Prospect Score

I once got some good advice surrounding decay. Instead of setting the score back to zero, we instead set the score to an arbitrary number that’s close to zero—like 3.
This allows you to distinguish current inactives from prospects who’ve never been active.

Score Decay: What you need to know

You can use automation rules to change overall Pardot score or scoring categories.

There’s a catch! While you can set the overall score to a specific number using automation, you can’t do the same thing with scoring categories. Here are your options:

See the catch? You can only increment or decrement a scoring category. You can’t just set it as a specific number. Not my favorite!

Score Decay: What you need to decide

Based on this, we decided to use overall score. The upside: Category Scores, because they don’t decay, show sales peak interest the prospect had in a product (i.e., a program—we use a category for each academic program). The overall score tells sales how interested they are right now.

Next up is deciding your time horizon for decrementing the score. When we reached this step, I thought I’d spend hours calculating the perfect time horizon. That’s probably overkill. Start with your best guess and live with it for a while. Check in with sales—are we reactivating too soon? Too late? Adjust accordingly.

My score decay automation rule looks for prospects who have gone 30 days without any activity, and sets the overall Pardot score to 3.

It’s all fine and good to lower scores over time, but I gotta be honest – our sales team (we’re a university business school, so sales = recruiting) couldn’t care less about prospects who aren’t currently interested.

Score decay, for us, enables something that’s a lot more impactful: finding prospects who went dark, or inactive, but later returned to your website and reactivated. Now we’re talking.

A separate automation rule listens for activation. In other words, prospects with the tag #30-days-inactive whose overall score has crossed a certain threshold—we use 8 because a single page visit = 1 point, so they need to visit 6 webpages to reactivate.

Pro tip: Add a rule to require that prospect still be opted in, if you want to prevent sales from contacting opted-out prospects.

This Reactivation rule removes the tag (this is important) and notifies the user assigned to that prospect.

Both rules allow repeats. Prospects can match again after 30 days has passed.

Notify assigned user – what if you don’t use contact owners?

Well then, you’re a Pardashian after my own heart! In higher education, a single contact in Salesforce can be a current student in one program, an alumnus of another, and a prospect for a third all at the same time.

Using contact owners doesn’t make sense, so we instead use Opportunity owners to determine which recruiter “owns” that prospect.

Instead of notifying an assigned user, our rule adds the prospect to a Salesforce campaign we created with a status of “New Entry.” The recruiters see newly reactivated prospects on a home screen widget, then reach out directly.

This works for us, but as you can see, there are lots of ways to accomplish something similar. Your org will likely have its own quirks that require designing slightly different solutions.

Have a score decay or reactivation function that’s drool-worthy? Share it in the comments!

*If you don’t know the reference, don’t feel bad. I had to Google it. #GenX-almost-Y

One thought on “Pardot Score Decay: Why We Don’t Set Prospect Score to Zero”