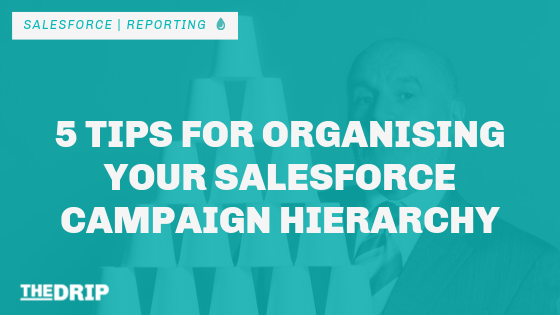 Campaign Hierarchies allow you to link related Salesforce Campaigns to one another and arrange them into a hierarchy structure. Having ‘child’ campaigns linked to ‘parent’ campaigns is beneficial for both reporting and general organisation, and is a big mistake not to use this Salesforce feature.

Trouble is, they are surprisingly hard to get started with! For instance, what dimension should you lead with top-down? By year, region, or business unit? Then, you may question how far down you should go – when is granular too granular?

These are the most common questions I get asked on a regular basis when guiding people through their hierarchy setup. Although there is not one single answer to these questions, there are a few tricks to setting up your campaign hierarchy to make it easier to manage going forward.

In this post, I will share 5 of those tips with you, for when you go into the unknown territory of the hierarchy.

Ps. at the end of this post, I will include a snippet from the conversation I had with Casey Cheshire on his podcast ‘Hard Corps Marketing Podcast’ – let’s just say that this post ties in nicely with my answer to Casey’s question: “Do you have a number one tip, or your most frequent tip, for what you really recommend for getting the most out of Pardot?”

Tip #1: Think About the Maintenance

Deciding how to organise your campaign hierarchy starts with figuring out how the structure will cascade, top-down. You could think of it like a tree; the roots grow into branches, that split off into many leaves. Once you’ve planted your tree, you can’t suddenly uproot it, or swap the branches for the leaves! 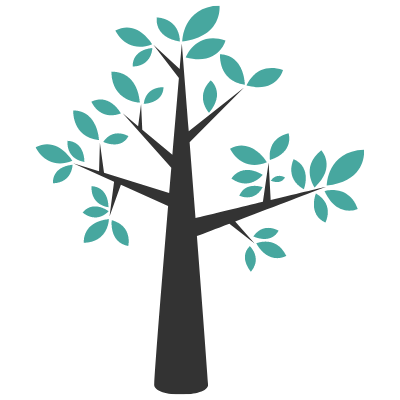 In short, what you place at the top of the hierarchy then determines the rest of the levels. As I mentioned in the introduction, this is the most common question that concerns people.

There are a few examples of campaign hierarchy structures recommended by Salesforce here. For some organisations, it may make more sense to create two different campaign hierarchies for each of their business units; for others, a regional approach makes more sense. 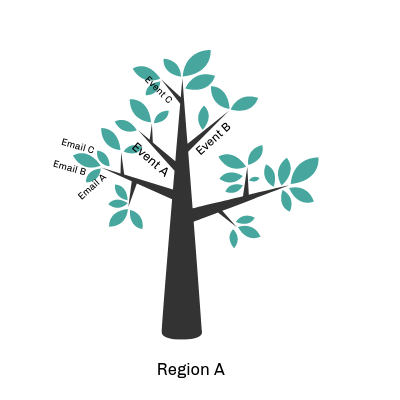 Whatever you decide, ensure that it is easy to manage as time goes on. What I mean by this, is what maintenance and set up will you need to repeat with each quarter, or year that passes? This is the downfall of having the year at the top of your hierarchy – you will have to rebuild the framework every year!

Tip #2: Think About the Reporting Roll-up

Another factor that influences how the structure will cascade (top-down), is what matters to your organisation in reporting terms.

There are two ways campaign metrics ‘roll-up’ that I want to highlight:

Salesforce Campaigns come with standard fields that summarise the figures from all child campaigns attached to a parent. Let’s walk through an example.

There’s 3 child campaigns that are linked to the same parent campaign. They each have some campaign members that have ‘responded’ to the campaign, eg:

Child Campaign A = 10 “Responses in Campaign”

Child Campaign B = 40 “Responses in Campaign”

The field ’Num Responses in Hierarchy’, on the parent campaign would, therefore, be 70.

Take a look at some of these fields available to use: 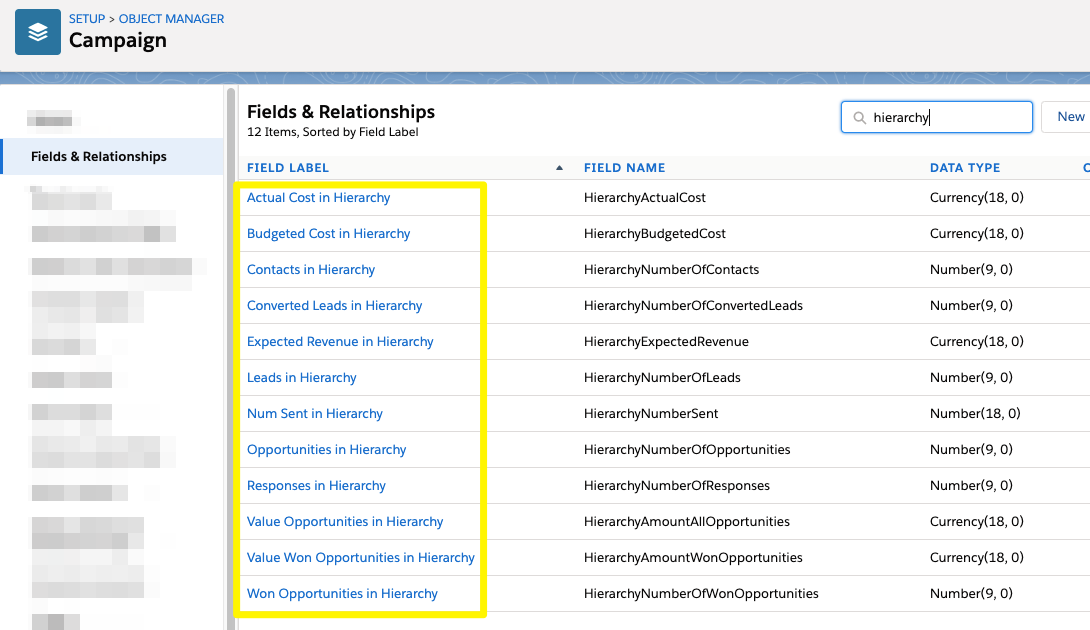 With Salesforce Connected Campaigns, Pardot customers can sync all activities happening on Pardot marketing assets (emails, forms, landing pages etc.) into Salesforce campaigns. These are displayed in the Engagement component. A special switch* means you can ‘Include Child Campaigns’, and instantly view the Email Click-Through Rate, Marketing Form Submission Rate, etc. for the whole hierarchy.

As you can see now with these two examples, what you place at the top should be a reflection of what you want to collate at the lower levels of the hierarchy to ultimately form your ’North Star’ KPIs.

Type and Tactic are two dimensions that I like to iron out early on.

Understanding the difference between the two can prevent your team from getting tripped up!

Campaign naming conventions are crucial, so establishing how you set the names of your campaigns should be done early on for the rest of your team to follow (you’ll thank me later).

However, keep them simple. I’ve seen naming conventions that can get very complex, very quickly – like cracking the enigma code just to figure out which campaign it’s referring to. Especially in large organisations, who have the capacity (and targets) to run many campaigns across multiple channels.

Plus, character counts for the campaign field exist when selecting a campaign from a pop-up window (both In Salesforce and Pardot).

To keep your naming conventions ’skinny’, I recommend two things:

For a particular campaign, come up with an internal nickname that uses only the keywords from the full campaign name.

People are tempted to stuff the campaign name field with information so that they can report ‘horizontally’. As an example, what I mean by this is adding a piece of information like the target industry (‘MFG’), because the marketer wants to pull a report on all Manufacturing campaigns.

The report filters would look like this:
Campaign name [contains] ‘mfg’

Pulling reports based on contains and the campaign name is somewhat risky. If industry was an important dimension for this organisation to report on, I would recommend setting up a custom field on the campaign called ‘Campaign Industry’, or similar. That way, the marketer can pull the reports they want without ‘over-stuffing’ the campaign name with industry codes that are prone to human error!

As you’re aware by now, Campaign Hierarchies allow you to link related Salesforce Campaigns to one another, with ‘child’ campaigns linked to ‘parent’ campaigns. Then parent campaigns can be linked by grandparents, which should roll-up to one campaign – what I like to name the ‘ultimate parent’. This is hard to monitor as a marketing admin.

I’ve found that one way to get around this, is to add a custom field on the campaign called ‘Campaign Level’. This is a picklist field, with values 1, 2, 3, 4. These represent: 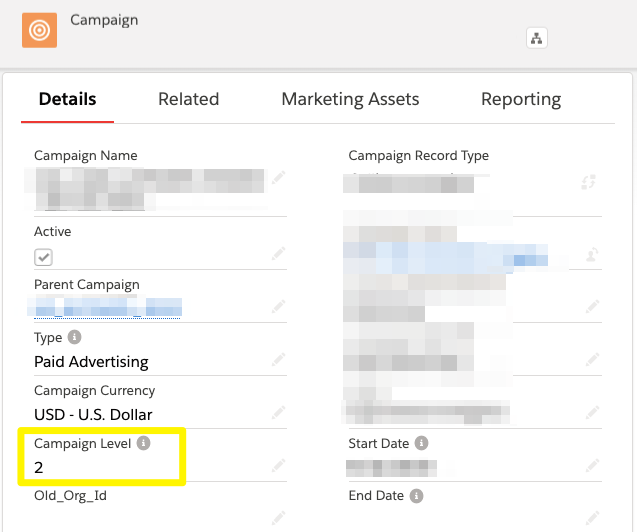 The first time I saw this field in action, I thought it was just a standard Salesforce campaign field! I soon learned that this team were smart to have implemented this numbering system to keep their hierarchies organised and clear; you should do too!

In this post, I have shared 5 tips for organising your Salesforce Campaign hierarchies. Although there is not one single answer to how you should structure the one for your organisation, there are secrets you should know to prevent getting rooted in too deep into a hierarchy that doesn’t, and will never, work for your reporting needs.

Good luck venturing into the unknown territory of the hierarchy!

How Important is Your Campaign Hierarchy?

This post ties in nicely with my answer when asked: “Do you have a number one tip, or your most frequent tip, for what you really recommend for getting the most out of Pardot?” Watch the clip below from this podcast episode (transcribed below).

Casey:
“Do you have a number one tip, or your most frequent tip, for what you really recommend for getting the most out of Pardot?” 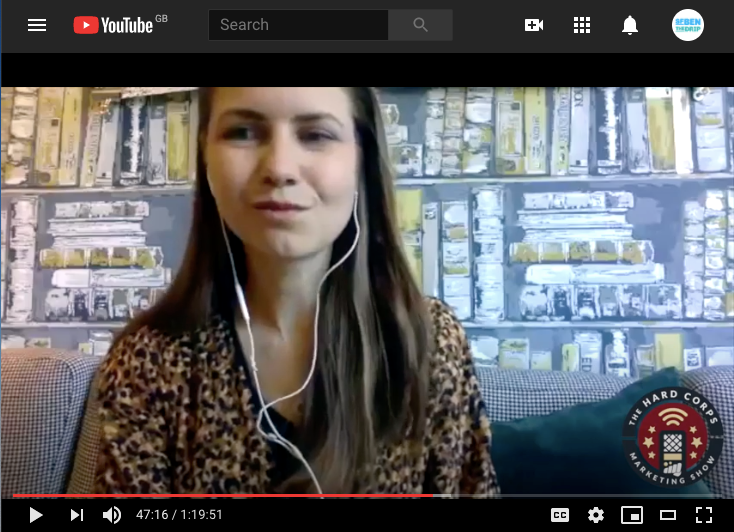 There’s the movement towards multi-touch attribution, analytics…I think the whole foundation of it that people often don’t spend enough thinking about, or discussing with their teammates is the campaign hierarchy.
It’s hard because there’s not one way to do it. It’s also one of those things that once you build it, it’s hard to backtrack and get out of it to rearrange it. I have these (productive) discussions with clients about campaign hierarchies because it’s very hard to organise all these marketing activities like ‘bam, bam, bam’ [signals with hands] into a single structure, cascading top-down.
So yes, I would say really do consider your Salesforce campaign hierarchy.”

Casey:
“The perfect follow-up question is; ‘How do I best do the campaign hierarchy’”

Casey:
“Come on, are there any recommendations, tips? Come on Mazalon, help us out!”

Lucy:
“I suppose, when people do get stuck, I say think about the management or the marketing director, what level do they want to see at? Is it just by region, as in they want to report on all campaigns by region? Or do they want to see it by product or business line? That’s often the two best ones. Ideally not by year, because then you will have to re-do it every year. That’s is the best option for some people! It’s very hard to say…”

Casey:
“What do people want to see as an outcome is a great point because you’re trying to make the spaghetti connect mid-way through. Start with the end in mind.”

Lucy
“I’m sure there are lots of other tips!”

Previous Post: 4 Marketing Cloud Personalization Techniques Beyond the Subscriber Name
Next Post: How to Customise Your Salesforce Campaign Hierarchy View