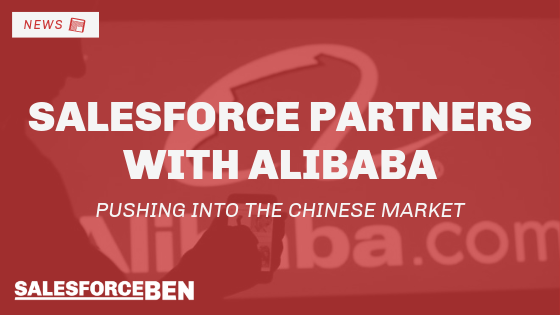 Salesforce has announced today that they have partnered with one of the biggest eCommerce companies in the world, Alibaba.

Alibaba are well known for their online platform allowing businesses and consumers all around the world to buy a wide range of products, mainly in bulk, from China. But over the years Alibaba has expanded into many other areas of business including cloud computing, payments and entertainment.

Salesforce has long tried to break into the Chinese market, back in 2007 they released Salesforce China Edition, aimed at small to medium-sized businesses to start using the worlds leading CRM. Despite this, Salesforce has the minority of its revenues from the Asia Pacific regions (10% Asia Pacific, 20% Europe, 70% Americas).

Following the lead of Amazon, it’s no wonder that Alibaba has expanded into the cloud computing market. “They [Alibaba] currently hold over half of the market which is estimated to grow 55% to $331.2 billion in three years, according to Gartner. Alibaba’s cloud business has been generating triple-digit revenue growth over the past three years, outpacing the industry.” – Bloomberg.

Alibaba will act as the exclusive provider of Salesforce to enterprise customers in China, Hong Kong, Taiwan, and Macau. This will strengthen Alibaba’s offering to the enterprise market, as they do not currently have an equivalent product. For Salesforce, this gives them a key partner in a relatively untapped market, to the potential that China has to offer.