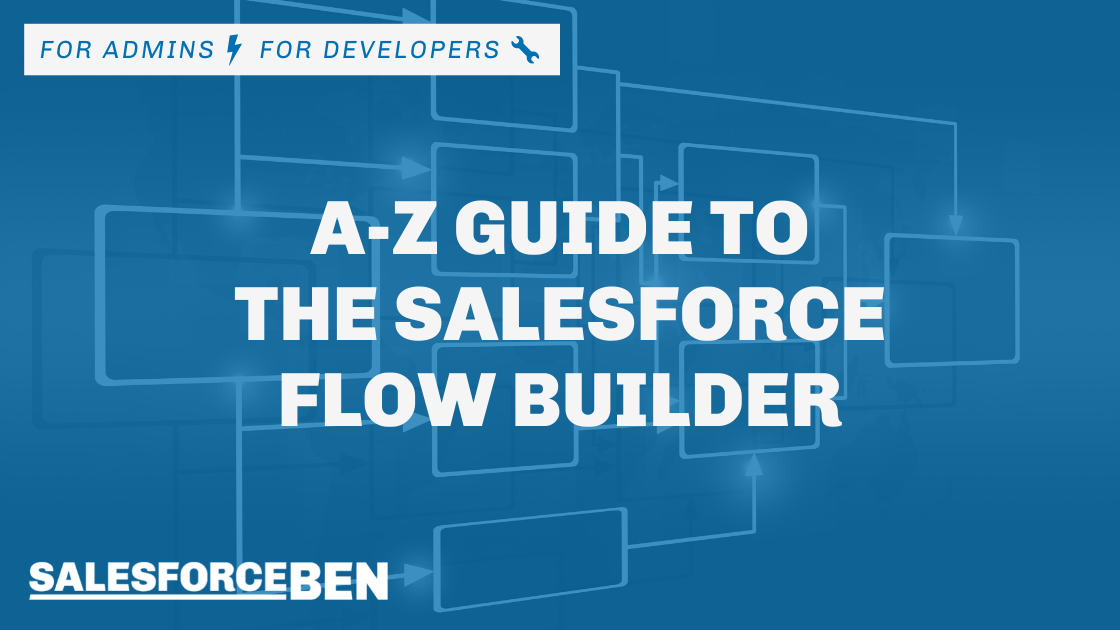 I love Salesforce Flows. Every time the Salesforce release notes drop, I get straight to reading them because I know that each major update will have new features for Salesforce Flows – sometimes stacks of cool new improvements around the UI, functionality, and overall productivity.

You may have seen my release write-ups on Flows during previous releases Spring ’22 and Summer ’21. As we moved forward, we thought it was best to compile all of these Flow features in one place; an A-Z glossary-style page highlighting what the Salesforce Flow Builder (formerly Salesforce Flow Designer) can do.

The ability to activate a Flow from inside the Builder wasn’t released until Winter ‘20, but once it was made available to the public there was a universal shout of joy! The old method meant saving the Flow, closing it, then navigating back to the Flow list and activating it from there. Now a Salesforce Admin can configure and debug their Flows and activate it all within the same canvas!

Autolaunched Flows are called indirectly by Apex, processes, REST API, and more. These Flows don’t require direct user input and are run in the background.

You may have noticed that my sample Flow has a darker appearance – that’s thanks to the Lightning Extension which you can add to Google Chrome from here.

While Salesforce are working on a new version of their Lightning Extension, check out this third-party Salesforce Dark Mode Chrome Extension, so you’re not left in the dark (unless you want to be!).

This is the ability to dynamically display elements within a screen based on other fields.

There have been so many times when I’ve had to build Flows that forced users to make an additional click and load a different screen based on what they had selected. This one is bound to be a game-changer! See before and after images of two Flows that achieve the same result (only the one with fewer screens has far fewer clicks too!)

Elements are individual tiles that are used to create a Flow. Depending on the type of Flow you create, different elements are available for use. For example, if you’ve created a Screen Flow, the Screen element will be available.

“Flow Actions simplify the flow building process by making it easier to create flows that connect with and perform actions on third-party systems without requiring additional integration or code” (source). Find these on the AppExchange.

Flow Builder replaced Flow Designer back in Spring ‘19 – a welcome upgrade with a simplified toolset and cleaner UI, for those who were used to building in any of the new Lightning Builder tools (Process Builder, Lightning App Builder, even the Community Builder). It laid the foundations for what would become the most powerful declarative automation tool that Sales Cloud had to offer!

Flow Builder is built using modern internet technologies, unlike the previous Cloud Flow Designer (which was built on Flash and was not able to work on mobile devices).

Flow Admins can use the built-in debug tool to make sure their Flows are running correctly prior to leaving the Flow Builder. The Debug Details in the right-hand-side panel will show a step-by-step breakdown of what actions are occurring, what variables are being referenced, what calculations are running, etc. The debug tool makes it super easy to test your Flows.

An Interview is essentially an instance of a Flow running. For example, let’s say a Flow Admin had created a Screen Flow that is called from an Action on the Account page. Each time that Flow is started by the User clicking on the Action, it creates a new Flow Interview.

A Flow Admin can allow a Flow to be paused and resumed. This is helpful in situations where a User will start using a Flow and may need to continue it later.

A Flow Admin can use a Loop element to repeat a set of actions almost infinitely. The Loop is based on a Collection of variables and the actions will repeat for each of the records in a Loop (or until the Loop is broken).

A Loop Variable is an individual item from a loop that needs to be handled individually. For example, if the Flow loops through a collection of Lead records, then a single Lead variable will be used as the Loop Variable.

Flow Admins now have the option to have the Loop Variables automatically created when they create a loop (a huge personal peeve of mine was creating them manually). Let’s say you had a loop called ‘lead_loop’, Flow Builder will automatically create a resource called ‘Current Item from lead_loop’. The result? It will save you a ton of time and make it much easier for new Flow users to learn how to use the tool.

These are the types of Flows you can create:

Each has its own entry in this glossary.

You can create multiple List Views and customize the columns in each of them, just like every other List View throughout the platform. As small as this is, I think it makes a big difference to how Admins manage their Flows.

When the Flow is created, it will subscribe to the specified Platform Event and wait until it receives a message. When that message is received, the Flow will run.

Record-Changed Flows are the declarative equivalents of an Apex Trigger. Essentially, this Flow type will remain dormant until a specific change is made to a record.

The ability to handle before and after events was previously not something a declarative tool could do and was reserved for Apex only. However, with the Spring ‘20 release, Flows now have the ability to run before the record is saved. This is a huge step for Flow and will grant even more power to declarative users.

Flows are made up of two key pieces – the Elements (the tiles that can be seen on the canvas itself) and the Resources (the individual variables and constants that make up the data within those Elements.

With rollback mode enabled in your Flow Debugger, any changes that are executed by your Flow won’t be saved while you test it. This helps to keep your data clean and tidy while you create and test your Flows. This is one of those tiny changes that will have a huge impact.

Simply check the box on the first screen of the debugger to enable it, and your database will remain 100% intact.

Screen flows are used when a user’s input is required to achieve a goal. This may be a new record-creation wizard, or a guided phone script, or performing a checklist of actions that update a hidden field on a record – just to name a few examples.

Screens can be customized to display text or images, or capture information from users  in the form of text fields, lookup fields, and checkboxes, for example.

From basic functions to more complicated Flow Builder automations, I hope this ‘A-Z’ has provided practical guidance for Salesforce users. What are some of your favorite Salesforce Flow features? Let us know in the comments.

11 thoughts on “A-Z Guide to the Salesforce Flow Builder”