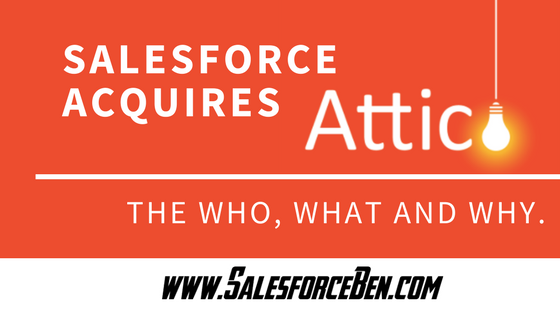 Attic Labs, the brains behind Noms, the first decentralized database, announced their acquisition by Salesforce on Monday. Although next to no details of the acquisition are publically known, this post will uncover who Attic Labs are, why Salesforce were keen to snap them up, and finally, what the Noms database does.

Who are Attic Labs?

Attic Labs launched Noms, their flagship creation, in August 2016. Almost simultaneously, they raised $8.1 million in Series A funding, backed by Greylock Partners. The two founders are ex-Google, having worked on the Google Chrome team, amongst other widely-known projects. With their impressive portfolios, it’s only right that we should expect something as revolutionary as the first the first decentralized database from the duo.

Salesforce have a taste for open-source products and services, so their affinity to Attic Labs (and Noms) is somewhat explainable. But, here’s the crux: Attic Labs will be joining the Quip team, which means that Noms will be brought to the hands of Quip users, on the content collaboration platform. Noms will facilitate fluid data sharing and collaboration from Quip’s ‘Living Documents’, in two core ways:

This may not sound like much, but addition will make collaboration on Quip more powerful and meaningful for business users – not to mention safer for data integrity.

What the Noms Database Does

In a nutshell, Noms makes it easy “to store, move, and collaborate on large-scale structured data”, and at volume. Using Noms to replicate databases, it’s possible to ‘rewind’ to previous versions of the database (retained by default), thereby combating the ‘single point in time’ downfall. Traditionally, databases haven’t been resistant to this type of aggressive manipulation, however, it’s different with Noms. Even if the database is disassociated, and later reconnected, single Noms databases will reconcile one another and rebuild its relational model. When Quip users will edit offline, there will be no trouble assimilating the changes with what has happened in the meantime. This is what is meant by ‘synchronizable’, the ability to reconstruct itself to any previous state.

For those of you accustomed to Git, you will identify with the similarities, as Noms is descendant from the Git version control system. What sets it apart from Git, is that Noms can support structured data, and in larger volumes (like CRM datasets, and larger). Read more here.

The Attic Labs acquisition does come out of the blue, following a long break after Salesforce’s spree in 2016. Yet, it’s exciting, and it’s fitting when we understand Noms’ ability to extend the Quip platform, plus Salesforce’s penchant for Open Source vendors. In a statement, the Attic Labs team said they will remain “proudly Open Source Software”, whilst being at the pioneering edge of business content collaboration. The availability of Noms within Quip will propel the collaboration platform forward, as a robust platform resistant to the demands of today’s CRM users.

Previous Post: Becoming a Certified Technical Architect: The Benefits
Next Post: Salesforce Spring ’18 Updates to help you get GDPR Compliant