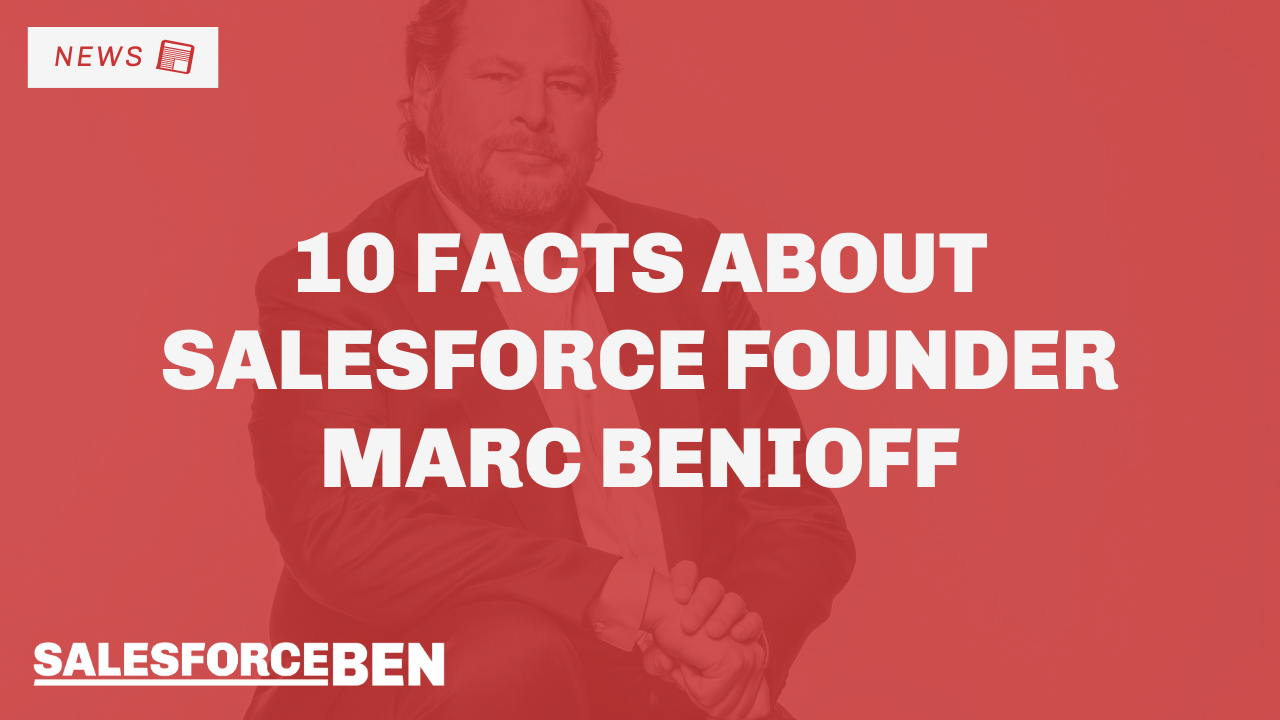 The Salesforce story is a fascinating one, it’s the classic silicon valley story of a company being founded by a few tech pioneers out of a small apartment in San Francisco. Fast forward to today, and Salesforce has over 70,000 employees across the globe, and more than 4 million members in its ecosystem, including customers, partners, ISV’s, and Salesforce professionals.

None of this would have been possible without Salesforce’s visionary founder and CEO, Marc Benioff. Marc refers to the past a lot when talking about the founding of Salesforce, claiming that there were many aspects of his earlier years that shaped the Salesforce idea and its growth. And let’s just say for a tech visionary, his earlier years were anything but “Normal”.

Here are some of the most fascinating facts about Marc Benioff…

In an interview with the NY Times, Benioff talked about how he was born an Entrepreneur and used to go around to people’s homes to see if they needed antennas or CB radios repaired. After, he got a regular job cleaning in a jewellery store which he didn’t really enjoy. But it was across the street from Radio Shack, where he found a computer and wrote his first piece of software. Source – NY Times

The first piece of software he wrote on that computer from Radio Shack, was called “How to Juggle”. Benioff sold this for $75, a sign of things to come… Source – Behind The Cloud, p20, Marc Benioff.

At 15 years old, he founded the company “Liberty Software”, where he created and sold games for the Atari 8-bit. He developed games such as King Arthur’s heir, The Nightmare, and Escape from Vulcan’s Isle, which by 16, enabled him to earn royalties of $1,500 a month, paying his own way through college. Source – Behind The Cloud, p20, Marc Benioff.

While Benioff was putting himself through college, he had a conversation with legendary Apple employee Guy Kawasaki, who offered him an Intern role at Apple over the summer. Here, Benioff got his first taste of working for a tech company, as well as being influenced by Apple founder and CEO Steve Jobs who was always in the building. Source – Behind The Cloud, p20, Marc Benioff.

Benioff landed a job at Oracle coming out of college. As a star salesman, he quickly became one of CEO, Larry Ellison’s favourites, and won Rookie of the year at age 23. Three years later, he was promoted to Vice President, of which he was the youngest ever, making over $1M a year. Source – Trailblazer, p5, Marc Benioff.

At 31, with all the success Benioff had, he felt lost. He asked Ellison for some time off, took a 6-month sabbatical and travelled to India & Hawai. It was here that spurred a lifelong interest in yoga and Eastern religions. It was also this trip where Benioff came up with the idea for Salesforce, a cloud-based CRM that could be accessed as easily as Amazon.com. Source – Trailblazer, p6, Marc Benioff.

Benioff founded Salesforce along with three others, in a small apartment 1 bedroom apartment atop Telegraph Hill in San Francisco. They used the closet as a server room. and were accompanied by posters of the Dalai Lama, Albert Einstein, and two dogs.

Fast forward to 2015, and the state of Indiana had just passed a bill that would make it legal for individuals to use religious grounds as a defence when they are sued by people who are from the LGBT community. At the time, Salesforce employed 2,000-3,000 in Indiana, and Benioff thought he should take a stand against this discriminative bill, for the sake of his employees and customers.

After emploring other CEO’s to do the same, receiving a lot of backlash from others thinking that CEO’s shouldn’t get in the way of the democratic process, Benioff threatened economic sanctions on Indiana if the law wasn’t reversed. This prompted the governor to react and change the bill. Source – Trailblazer, p34, Marc Benioff.

In 2018, Benioff and his wife put their hard-earned cash to work and bought Time Magazine. He and his wife said they were “honoured to be stewards of this iconic brand.”, “The power of Time has always been in its unique storytelling of the people & issues that affect us all & connect us all,” Benioff wrote. “A treasure trove of our history & culture.” Source – Wall Street Journal

From humble beginnings, a kid that liked to tinker with electronics and write computer programs, Benioff has built one of the world’s most admirable companies from the ground up. This has given him the title of self-made billionaire, with his network currently standing at around $8.7B. Source – Forbes