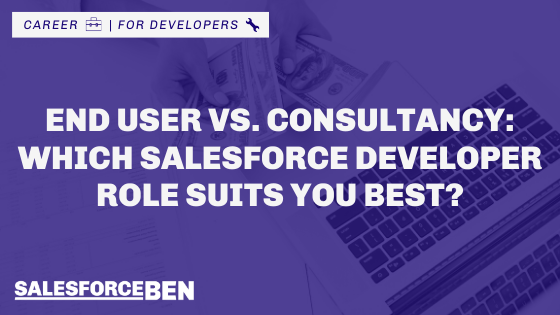 Making the decision to work in an end-user organization (a Salesforce customer) or in an organization that sells Salesforce services (a consultancy) sparks a discussion. There are several factors to take into consideration, such as workload and the potential impact it could have on your lifestyle, which ultimately makes it a personal decision.

Salesforce Developers find themselves in a favourable position, with higher demand and salary potential than equivalent developer roles in other industries.

In our Salesforce salary guides, we typically say that working for a consultancy increases your salary potential, based on our own experiences working in the Salesforce ecosystem a number of years, across a variety of roles, collectively.

When it comes to answering the question: “does working at a Salesforce consultancy increase a developer’s earning potential?”, there are several discussion points. As you will see, there are open-ended questions that summarise each section; while I cannot answer these definitely based on the dataset we have access to, these questions do give you a starting point for approaching other developers that could share their opinions with you.

At an end-user organisation: Requirements are typically more simple and predictable when a developer is working with one single org (fewer unknowns).

At a consultancy: there’s a variation in projects and requirements, which may be appealing to some people. The added pressure of project-based work and client deliverables should be a serious consideration before switching to a consultancy role.

The big question: “do developers get compensated for the high-intensity projects and potential stress?”

At an end-user organisation: Organisations may not be as willing to invest in junior developers, and would prefer an individual that was up to standard already (as opposed to a blank canvas). Training, certification exams and recurring certification maintenance combined can become a big cost to organisations, fast. You’re more likely to find yourself in a smaller team, or solo. You need a team around you if you want to learn quickly.

Furthermore, it’s in a consultancy’s best interest to develop your skill sets. The more experienced you become, the more they can bill you out at (clients pay a higher rate for your time and expertise).

If you find a good mentor internally, it could potentially accelerate your career.

The question: “do consultancies offer a lower salary for junior developers in exchange for the training potential and expert mentorship?”, “Are individuals happy to trade in salary for training and mentorship, if it promises payback in the long term?”

At a consultancy: Salesforce consultancies tend to be organisations that place high importance on ‘company culture’, ‘employee engagement’, simply put – they want to make working for them as appealing as possible, to attract the best developers.

Again, this is not a universal rule. There will be consultancies that have terrible company cultures, and end-users that have tip-top employee engagement and perks. Although this is based on our observations, you should do your own investigation for any company you’re considering working for.

The question: “are developers happy to substitute salary for good company culture and working environment?”

At a consultancy: you will have exposure to other aspects of projects, eg. business analysis, project management, pre-sales.

Being a ‘technical consultant’ can certainly have appeal. We all know that technical knowledge paired with business analysis skills is a winning combination, and these individuals will be those that ask “why do you want to do it that way?”, asking questions to understand if they are missing some context before proposing an alternative solution that aligns better to Salesforce best practice.

The question: “are developers attracted to the opportunity to diversify their business orientated skills, to have the option to move into different career paths in the future?”

Working on a contract basis is also another style of working that developers can pursue. As you see in the salary data, contracting comes with separate salary potential. However, Imran was right to point out that contracting is best suited for senior developers that could ‘handle whatever the client will throw at them’.

Check out the Salesforce Developer Salary Guide for more information on which factors could determine your salary, based on data from the world’s largest Salesforce salary.