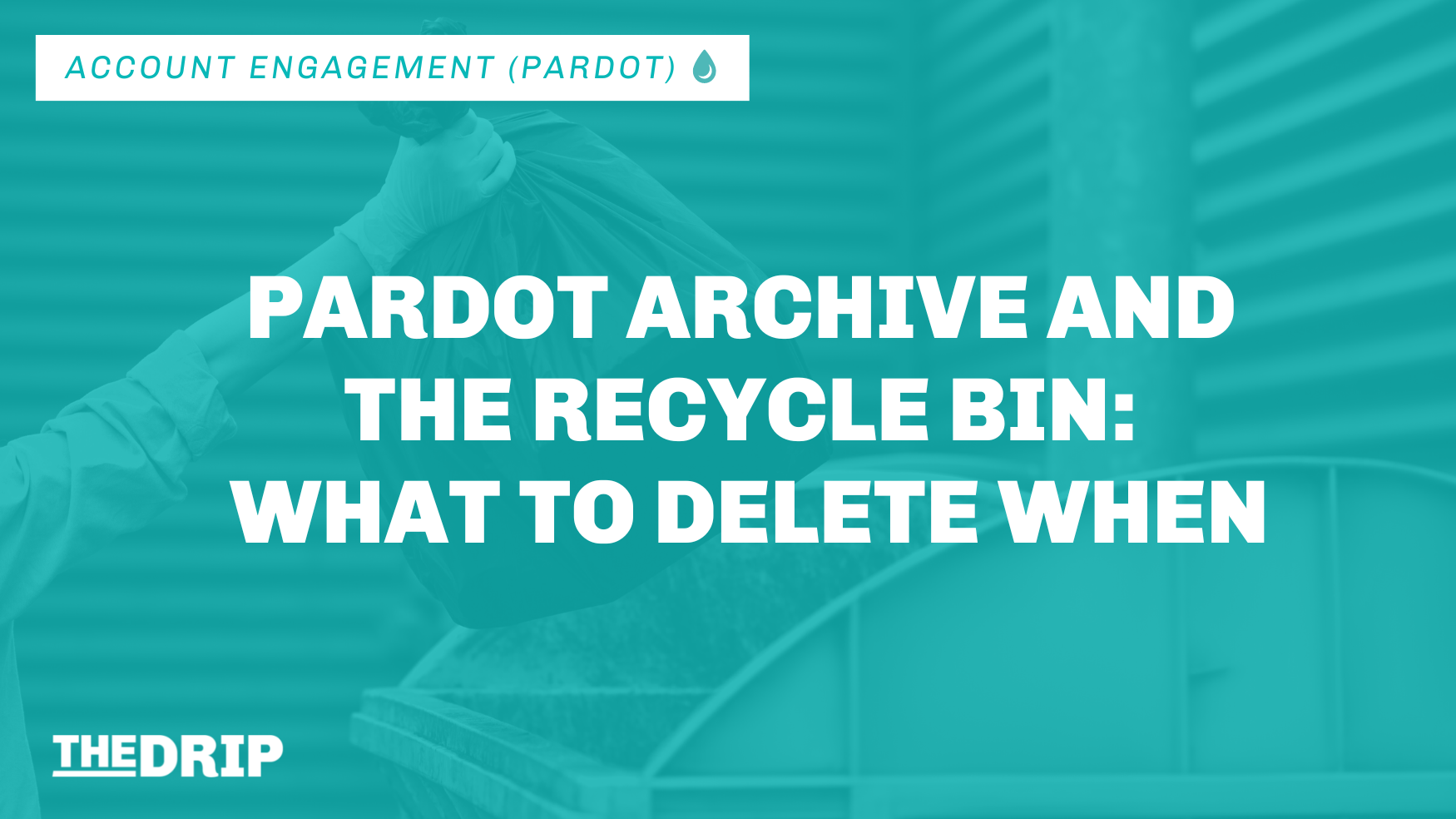 Marketing databases need regular cleaning, and archiving records in Pardot (Account Engagement) is a large part of the upkeep. Archiving can cause confusion and stress as the action appears in the Pardot interface as “delete” – what may not be obvious, is that almost all types of Pardot (Account Engagement) records are sent to the recycling bin, there for you to restore (“undelete”) if required.

However, Pardot archiving is often neglected until ‘push comes to shove’, such as when you’re bumping up against your account’s limits. Once you understand the why, what, when, and who of archiving (deleting), then you can start decluttering without fear. Let’s establish the 4 archiving W’s, and give you some pointers to help run a well-oiled machine.

Being well-rehearsed on the benefits of Pardot (Account Engagement) archiving will mean your account stays clear of clutter. Plus, your team is more likely to get onboard to support this necessary account maintenance.

It’s worth noting that limits will vary depending on your Pardot (Account Engagement) edition. Check out the guide below to see which limits you could be affected by:

How to Archive in Pardot: Pardot Recycle Bin vs Permanently Delete

There are three ways to archive in Pardot (Account Engagement):

Tip: Selecting the top checkbox in the table’s header will only select the records on the screen. To select all, click the hyperlinked text, as highlighted below.

As we mentioned in the introduction, archiving can cause confusion and stress as the action appears in the Pardot interface as “delete”; what may not be obvious, is that almost all types of Pardot (Account Engagement) records are sent to the recycling bin, there for you to restore (undelete) if required.

The table below compares the type of Pardot record, what happens when you click “delete”, and highlights those with set account limits that you need to keep an eye on:

For records that aren’t instantly deleted, the flow goes as follows: click “delete” → record is sent to the recycle bin → click the cog icon beside the record and “undelete” to restore.

As we will see in the next section, prospect records are the exception as they can also be “permanently deleted”.

Reasons to delete Pardot prospects include:

The first two criteria (hard bounce and do not email) are somewhat universal definitions from one organization to the next. However, the last reason listed is especially tricky. What does unengaged mean to your organization? For some organizations, who send a high volume of emails, this could be not opening/not clicking within the most recent five emails; for others it could be when the prospect has been officially ‘killed’ by the sales team, such as disqualifying a Lead record, or making an Opportunity as “closed lost”.

Note: Of course, there is nuance here to consider, according to the unqualified/closed lost reason. Hopefully you’ve tailored your account to treat prospects with certain reasons differently from other reasons, i.e. if the prospect needs more marketing nurture and/or there’s a chance of remarketing to the prospect in the future.

Here is the process for deleting an individual prospect record:

Note: If the prospect’s associated Lead/Contact record is deleted from Salesforce, the corresponding prospect record is automatically deleted (if your account is non-AMPSEA, this is an optional connector setting), which helps to eliminate disparity between Salesforce and Pardot databases.

The guide below gives you further information on how to check your prospect count in relation to your account limit, and tips on which prospects to consider archiving:

Prospects in the Pardot Recycling Bin

Here are some rules to remember when prospects are in the Pardot recycle bin:

Automation rules – people create them, use them – then forget about them. Unfortunately, these abandoned rules will stack up quickly and push you further towards your account limits.

If you come across automation rules that are inactive (i.e. in a paused state), think twice before archiving them. Some rules are required less frequently (e.g. for an annual campaign), or could be critical for account operations (e.g. periodically cleaning out spam data). Make use of the description field to communicate the context to anyone who views the rule.

If automation rules were created ‘some time ago’ (e.g. six months ago) and have never matched any prospects – this is an indicator that the rules have either never been activated or are just useless! Use the “Inactive Automations” filter (shown below) to single these rules out for mass deletion.

Why would you archive a landing page in Pardot? Well, one that’s served its purpose and is no longer required. You don’t want prospects coming across a landing page for a campaign that’s finished; if a prospect was to submit a form, not only would it skew your campaign metrics, but there’s also a risk that their request can’t be served (e.g. no sales follow-up).

Get into the habit of setting archive dates when creating new landing pages; automatic archiving can alleviate some of the work.

Email templates can be archived when, similarly to landing pages, they are no longer required or are using outdated branding. You can then “undelete” if they are required again – or, as email templates in the recycle bin are not editable, you can undelete if you need to fetch an element from the template (e.g. the font, or background color).

When Should You Archive in Pardot?

Archiving should be a routine, and requires discipline. The ‘when’ will depend on the type of Pardot record you’re referring to. As you’ve seen through the guide, ‘when’ to archive varies:

You should include how frequently archiving should happen, and be specific. Leverage your account audits, and make archiving a key priority during those times. Most people choose to audit their account quarterly, or every half a year.

Who Should Archive in Pardot?

Now, to look at process ownership. Knowing who will own the process is important to make sure it gets done. If you don’t have a designated Pardot Admin, I suggest you split up the responsibility to the most organized team members. Their responsibility will be to collate lists of assets to delete, circulate it with the rest of the team to seek approval from the owners. You can create the sheet through a CSV. export.

Document it! It may seem over the top at first, but I’ve found having an archiving ‘rule book’ and log of archiving dates to be incredibly useful.

Just remember the why, what, when and who of archiving, then you can start decluttering without fear.

Previous Post: 10 Pieces of Unconventional Salesforce Career Advice
Next Post: Why No One Looks at Your Salesforce Dashboards – How to Improve Reporting Adoption