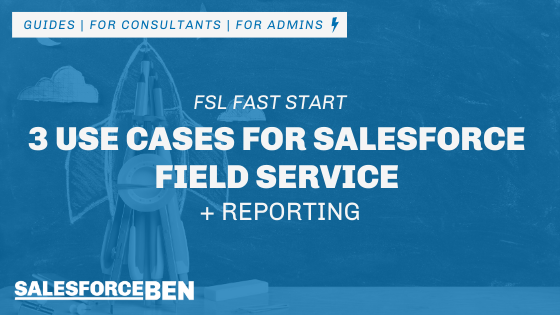 @Aidan Flynn is a Co-Founder and Solution Architect at @Twilo, a multi-cloud Salesforce Implementation Partner.

When it comes to Service Territories in Field Service Lightning, a lack of attention to detail on territory design can seriously impact the dispatcher’s satisfaction with the system. This is not just the consultant’s responsibility; the client should be giving this some serious thought because minor changes can result in vastly improved productivity.

In this article we will review Service Territory types and considerations to optimize design, ensuring the success of your implementation.

What are Service Territory Types?

Let’s start by taking a look at the 3 types of territory available:

With these in mind, we’re going to cover some typical scenarios relating to territories in Field Service Lightning, using real life examples of some territory-based challenges we’ve faced when implementing this product.
To protect the identities of those involved, we have renamed the star character to Big Dave.

How Service Territories Work – Use Case

It’s Big Dave’s big day.
Big Dave is a contractor who installs, repairs and maintains garage doors for a home improvement company in Chicago.
Normally, Big Dave sticks mostly to the territory where he lives (Chicago West). However, today his co-workers are taking the day off, so he’s got to breach the borders of his primary territory and visit two other secondary territories.
As you can see below, the Field Service Lightning engine takes him on a bit of a journey through Chicago. 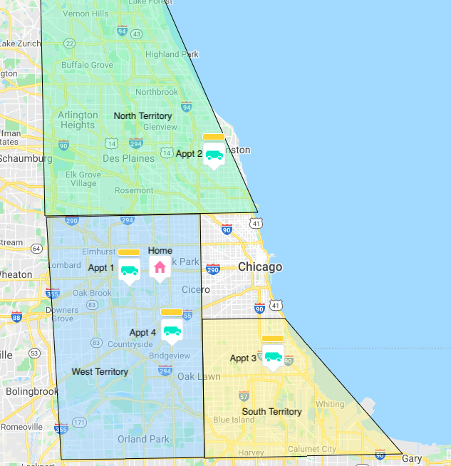 The dispatcher has given him temporary access to the North & South territories; this is done by adding dated Service Territory Member (STM) records.
All the drive time means Big Dave is only productive for 4 hours, but it’s a bit of an emergency, so no worries.

As an experiment, we temporarily made Chicago South a “relocation” territory to demonstrate why it’s not meant for this kind of situation. At first glance, it looks like it’s worked, but as you study it further you’ll notice that the travel time has not calculated for the crossovers between territories.

This is not a bug, but expected behavior. Relocations really work best when they are for a day or more, otherwise there will be gaps in travel time.

Why Not Just Lump Them All In One Primary Territory?

The Field Service Lightning engine, particularly when it comes to Optimization, uses the travelling salesman problem to sequence the day’s appointments.
This means it will normally try to send everyone in a circle within the confines of the territory, working away from a home base and then gradually back towards it. That’s great in small territories but bad news in large, highly populous areas where Field Technicians are likely to regularly hit traffic.
In a territory this size, Big Dave’s big day will become the norm, and some days there will be even more travel time. 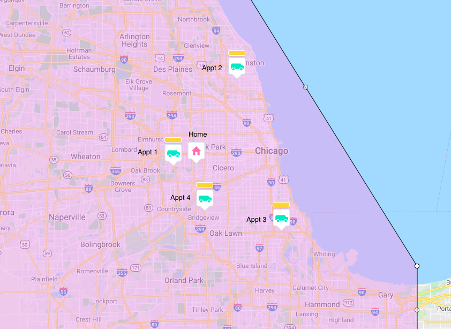 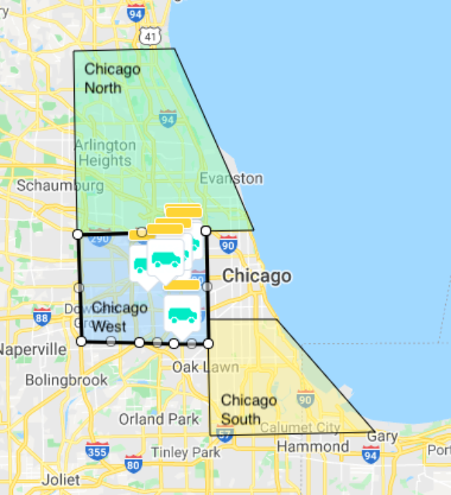 Now you can see why the design of Field Service Lighting Service Territories is so crucial to the overall success of the implementation. The right balance must be found between customer demand, workforce size and territory size in order to get the desired result.