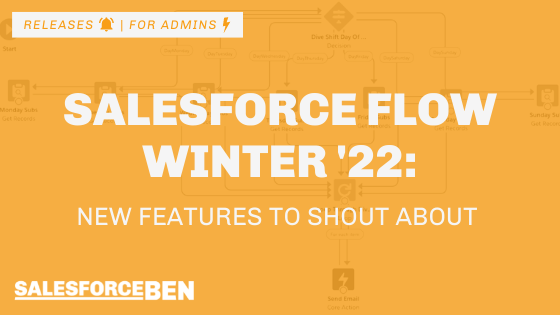 Every time the Salesforce pre-release orgs go live, I get straight to searching because I can guarantee there will be updates to Salesforce Flows.

Winter ’22 has introduced new improvements to Salesforce Flow – and plenty of them to shout about! Here’s my summary of all that’s coming to Flows and the Flow Builder…

Outbound Messages are now available as an action in the Flow Builder. Outbound Messages send messages to external services, beyond Salesforce (the clue is in the name). This is a major addition that will solidify Flow’s reputation as the go-to Salesforce automation for all admins. Could this be the final nail in Workflow Rule’s coffin?

Setting up the Record-Triggered Flow Start Element used to be a multi-step process.

Now, those steps have been combined into one and enhanced further.

The ‘Object’ and ‘Trigger’ sections are now on one single page, which pops up when you create the Flow.

You can also optimize the Flow for a specific action set:

3. Call a Subflow from a Record-Triggered Flow

Record-Triggered Flows now have the ability to call Subflows. This was previously restricted to other Flow types.

Now, allow complex logic to be reused across multiple Record-Triggered Flows without having to be rebuilt each time.

This isn’t something I saw coming – I thought Data elements would forever be limited to Create, Read, Update, and Delete (CRUD). That’s not to say this new Data element won’t be incredibly useful! Introducing, Roll Back Records!

Rolling back your Data element changes would be useful in situations where:

5. Relabel the Navigation Buttons in a Screen Flow

There are times when Pause, Previous, and Next just aren’t quite exciting enough to define your navigation within your Flow.

Sometimes you need to add a little more pizazz, or provide a more meaningful explanation as to what will happen when the button is clicked.

One of the biggest issues many people have encountered with Auto-Layout Flows (myself included) is that if a slight adjustment is required to a path, you sometimes need to switch Auto-Layout off, make the change, and then switch it back on.

Looks like this is coming to an end in Winter ‘22, with the ability to reconnect elements throughout a Flow with ease.

If you’re adding a Scheduled Path to a Record-Triggered Flow, and want to be able to control the number of interviews executed within a Batch, now you can!

If you’ve got some more complex actions lined up and need to restrict the number of records that are run at the same time simply reduce the Batch Size. It’s not recommended to increase it above the default of 200 for performance reasons (and the fact that you’ll be more likely to run into issues with Apex governor limits).

If you created or edited a Record-Triggered Flow prior to Winter ‘22, you’d only have the option to offset a scheduled path by days or hours.

Now, in Winter ‘22, you have the ability to offset it by minutes.

This may be useful in a fast-paced sales team when a lead comes in and you want to schedule a number of actions to be executed in quick succession.

When debugging a Record-Triggered Flow with more than one path in Winter ‘22, the very first thing you’ll be asked to do is select which path you’d like to test. This is valuable, making it easier for you to design more complex Flows and test each leg of it thoroughly.

There you have it! Those are my Flow features that have been uncovered so far in Winter ‘22 – no doubt there’s still more to explore, and soon we’ll have access to the Release Notes as well.

Special thanks to Daryl Moon from CertifyCRM for highlighting a number of these new features to me!