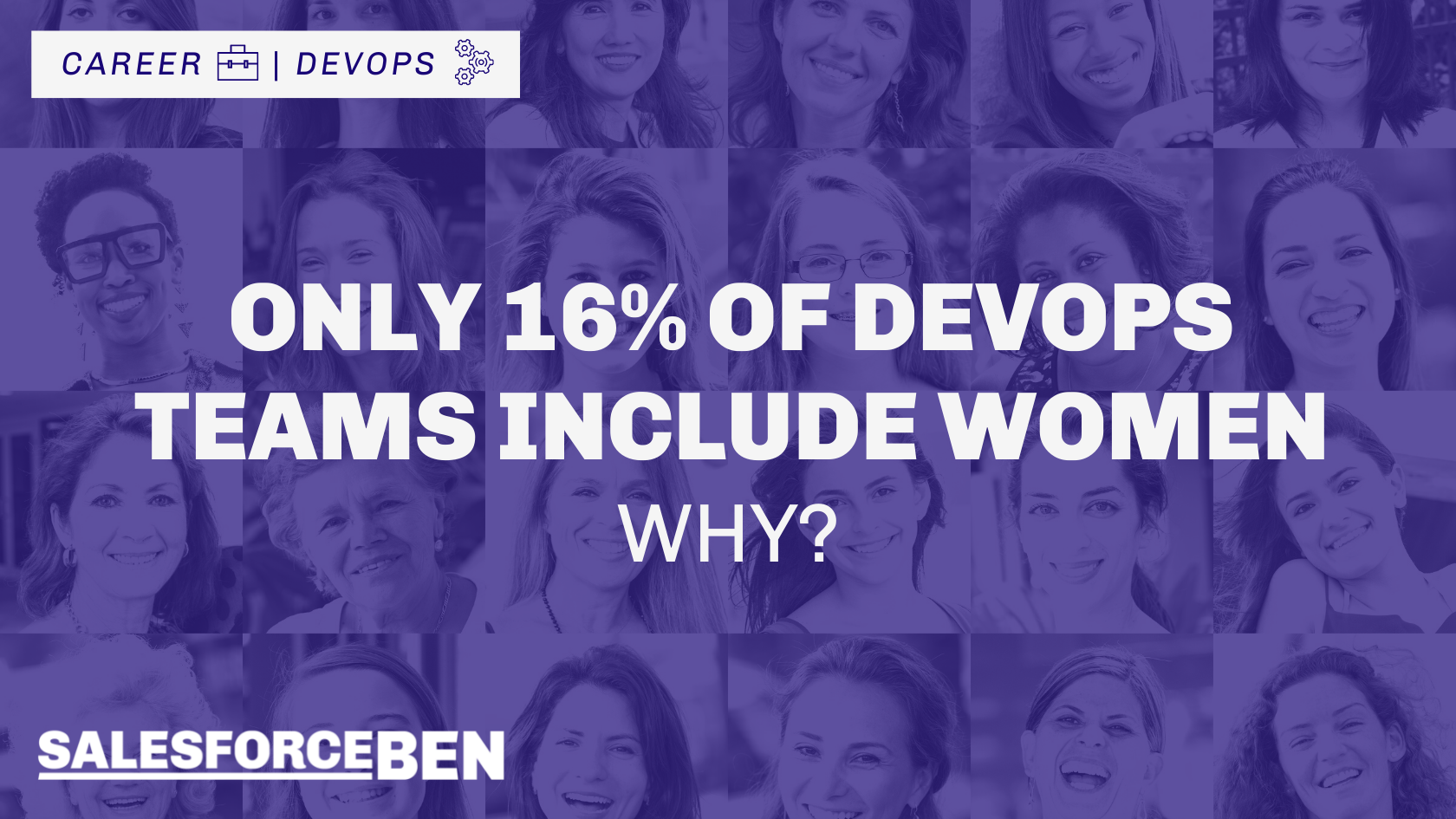 DevOps technologies are rescuing professionals from inefficient deployments and poor release experience. There once existed a ‘black box’ of release management, where things would go wrong during deployments that were challenging to identify and fix, let alone be prevented from happening in the first place.

The working days that stretch into nights of debugging don’t offer a healthy work-life balance that everyone needs and deserves. However, this bleak outlook is changing – thanks to DevOps technologies. Industry reports have found a vast gender imbalance, with one stating that only 16% of DevOps teams actually include women. I spoke to an expert at the forefront to find out why she thinks this is the case, and how we can begin solving it.

Ashley Dodge is the VP of Community at Copado, a role that is all about connecting DevOps professionals. Her job title is one that’s often interpreted differently and shaped by the individual in that role. Ashley, along with Copado, has approached the idea of Community on multiple fronts to ensure everyone working in DevOps is included:

Ashley has blazed an impressive career path in different roles across the ecosystem. What attracted her to working in the DevOps space was that it solved a problem she had experienced first-hand during her many years as a Salesforce implementation consultant. Combined with Copado’s focus on community-building, it was the perfect fit for Ashley.

In the early days of her career, Ashley worked for a company that provided recommendations for local service providers – think phone and web recommendations for how to find a good electrician. It was during this first job that she was exposed to the true impact that community, when powered by technology, can have in people’s daily lives.

Ashley’s next career move was joining the Salesforce ecosystem by becoming a consultant. A significant challenge she encountered early on was release management. She would lead clients through requirements gathering and approval demos, only to have things break on the day of the release. Release days (and weeks) were incredibly demanding, and she began to understand why she was often the only woman in the room. This experience was the black box of release management.

Not nearly soon enough, Ashley then found Copado. She heard of their effort to making life easier for their DevOps teams, and that sparked her interest.

Why is There a Shortage of Females in DevOps?

We’ve said more than once that Copado is restoring quality of life for professionals and teams – in reducing stress and lessening the chance of working those long days that stretch into longer nights of debugging.

Ashley understands why – because she has lived it! A former client of hers had a building that contained “bunk rooms.” These spaces were filled with bunk beds, and even had a full-service kitchen. They existed because, on release weekends, the supporting development team stayed on site. It’s an unrealistic working environment in which people need to give up evenings and weekends throughout the year to live onsite, just to manage a release.

Another time, she recalled being one of only two women on an implementation project. Each evening she’d watch her colleague FaceTime her children and read them bedtime stories. This coworker was talented and passionate and, as the release manager, was expected to be onsite with clients every week, often spending her Saturdays working through a release and making it home just in time to see her family on Sunday. While she was making it work through FaceTime, it was a hard situation.

Now that DevOps technologies exist, it’s opening the door for more women to see themselves in DevOps roles because it’s not such a time-heavy burden.

People no longer have to give up their evenings and weekends, as these roles have schedules that are far more flexible. As women haven’t historically been in DevOps roles, there’s a lot of catching up to do.

Enablement for Women in DevOps

In March 2021, Ashley and her team launched a DevOps program for women at Copado. Since then, more than 500 women have attended their events and over 300 women have been certified via the program. During these events, women can expect:

Ashley and Copado hope to certify 1,000 women in DevOps skills this year alone.

The company will strengthen its partnerships with other organizations already focused on empowering women in tech. They announced their partnership with Supermums, who have already done so much for the Salesforce community and for women in tech. With this partnership, Copado and Supermums will provide hands-on DevOps skills training.

“We wish to help more women understand where their skills are really transferable for DevOps opportunities.”

Challenges for Women in DevOps

Representation is the key to getting women to join groups like Copado’s. Before launching the Women in DevOps group, Copado launched a mentorship program, reaching out to many seasoned professionals to ask them if they would be willing to be mentors.

They were not surprised when women didn’t step up. The few women in DevOps were either already overburdened by the number of commitments they had, or they didn’t feel like they had enough experience to become a mentor.

Now, a year after launching the mentorship program, 10% of the mentors are women. This was a very deliberate and intentional effort – one that more organizations need to recognize and be just as deliberate in addressing.

It’s free to register for the Copado community – go to success.copado.com, where you’ll find free self-paced training and learning paths. They also offer training workshops to bring groups together so they can ask and answer questions in real-time. If you’re particularly interested in DevOps opportunities for women, we have a discussion group you can join – from the main menu, go to Groups and search for the Women in DevOps group. From here you can stay plugged in with opportunities to join the networking and training events, as well as find great career opportunities.

Until now, Copado has blazed a trail for Salesforce professionals – they have trained 35k workers in DevOps best practices and technical enablement, and certified 20k people across Copado’s four training levels! During this Fiscal Year alone, 3,500 people have been trained.

After speaking with Ashley, I came away with a positive outlook as to how women in DevOps will evolve in the right direction in 2022 and beyond.

What Ashley said is what we also see here at Salesforce Ben. I’ve observed that women are more likely to hesitate before putting themselves forward, whereas men tend to be more assertive with their skills and talents. For example, when contributing to the blog, many women doubt they are experienced enough, and it’s our editors that provide the encouragement: “you are, you definitely are!”

Writing, mentoring, training… These are all great ways for people to get involved to boost their confidence within their professional roles, and improve representation as a result.

Finally, the work-life balance that women need – and everyone deserves – is driving further innovation, whilst highlighting the fact that inefficient deployments and poor release experience is a real problem that needs to be solved.

Previous Post: Salesforce Lead Routing Solutions – An Overview
Next Post: The Ultimate Guide to Every Salesforce Product in 2022 [Infographic]