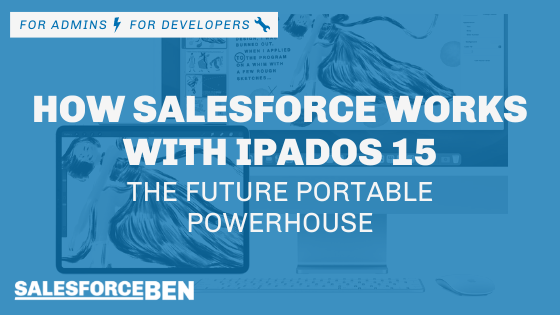 Apple’s iPad Pro has become increasingly laptop-like over the years with versatile IO ports, powerful hardware, an incredible touch screen display, and software that is slowly (but surely) leveraging the hardware features.

iPadOS 15 brings significant upgrades – an entirely new Safari experience, features that allow users to focus better and more ways to digitally connect with each other (SharePlay). These are a few highlights worth mentioning (even if it wasn’t the update that iPad enthusiasts were hoping for!)

Before we begin the build, let me share that for the past few weeks I’ve been running the first Developer Beta that Apple has published. iPadOS 15 isn’t due out in its final form until September/October 2021.

As with Salesforce, don’t make any purchasing decisions based on upcoming and unreleased features, as they have a habit of modifying those before the final release!

My Hardware of Choice

I’ll be using my trusty 2018 12.9” iPad Pro with Apple’s Magic Keyboard accessory. Although it’s nearly 3 years old, I’ve found this iPad to have kept up its pace over the years and haven’t found a reason good enough to upgrade to one of the later models.

It’s worth noting, however, that the latest 2021 iPad Pro comes with Apple’s new M1 chip – the same that’s running in the newer Macs. It’s also boasting a Thunderbolt 4 compatible port, much more capable than what’s running on older iPad Pros.

It’s for this reason that there was speculation that Apple would evolve iPadOS more this year with some more ‘Pro’ features or apps. While we haven’t received these updates, iPad still gets closer and closer to the ‘laptop replacement’ we all dream of with each new update.

Safari has been completely redesigned this year, boasting a completely new experience in iPadOS 15 as well as iOS 15 and macOS 12 Monterey.

A complete visual overhaul, as well as some privacy features and the ability to install extensions, make Safari feel like a brand new browser.

In our modern connected world, it often seems impossible to focus on the one task we should be applying ourselves to, at any given time. To help make it easier to avoid distraction and focus on the task in front of us, Apple has introduced a number of Focus features.

Firstly and perhaps the largest update, are the new Focus Modes. This is a ‘Do Not Disturb’ rebuild that gives users granular control over which apps should be able to grab your attention.

These Focus modes will sync across all your devices that run iOS 15, iPadOS 15, macOS 12 Monterey and watchOS 8, which will allow you to silence your entire digital world when need be.

Updates to Notifications allow you to reduce the amount of time you spend scrolling through useless information. Notification Summary offers a twice-a-day ‘highlights reel’ of notifications from certain apps. Notifications also have larger app icons to help users make faster decisions about whether or not they want to waste their time on specific apps and instead prioritize whatever app state they’re currently in.

Video calling apps like Zoom, FaceTime and Discord help us connect face-to-face without having to leave our homes, but there’s still a lot we miss out on in terms of connecting. We can’t lean over and show our friends an amusing TikTok and see/hear their reaction, nor can we watch TV or listen to music together.

That all changes with the new SharePlay updates. While on a FaceTime call, users are able to watch video content or listen to music together and even share our iPhone or iPad screens (hello, remote tech support!) As a bit of a cherry-on-top, FaceTime calls can now be scheduled (just like Zoom and other platforms) and our friends, family and colleagues with Android phones or Windows computers can join using a link that opens the call in a browser. Cross platform FaceTime calls are FINALLY a reality!

What About Salesforce App (SalesforceA)?

Salesforce has developed native iOS and iPadOS apps and they’ve certainly come a long way in the time since I’ve been using them.

When thinking about whether you should use Salesforce in your device’s web browser or have been using the native app, for iPhone anyway, I’d definitely suggest using these apps over what’s available through the browser. For the iPad however, I strongly believe that the web-based, desktop experience is the way to go (although it is ultimately down to personal preference).

As I use the Magic Keyboard accessory on my iPad Pro, I’ve got a physical keyboard and a trackpad, making for a much more laptop-like experience. This is why I prefer to use Salesforce’s web experience for the desktop. It’s had a lot more development and there are a lot more features available for Salesforce Admins.

Since the Flow Builder was released using modern web technologies (rather than Flow Designer that was built on Flash), the iPad has become a far more powerful Salesforce Admin tool.

A small disclaimer, it’s NOT a full desktop experience just yet. Sometimes when trying to drag elements on the canvas, it will hang or behave unexpectedly, but aside from the occasional hiccup it’s important to recognise that we can now work with Salesforce’s most powerful declarative automation tool from a touchscreen tablet. Incredible!

The Future of iPadOS

Like many other Apple enthusiasts, I want Apple to remove the training wheels from the iPad and let it fly.

I want to see some serious ‘Pro’ features for the new iPad including Pro apps brought to iPadOS (like Final Cut Pro, XCode, etc).

I’d love to see the ability for macOS apps to be ported backward onto the iPad in a similar way that iPad apps have been ported to macOS with Mac Catalyst.

I’d love to potentially see a ‘Mouse and Keyboard Mode’ where the iPad can have an almost entirely Mac-like UI and behaviour and maybe drop touch functionality altogether to allow for behaviour in mouse-based tools like Flow Builder to work 100% as expected.

I think the iPad could potentially replace a MacBook in a number of additional ways. I think the foundation has been laid and the iPad is already much more than the gigantic iPod Touch it was, when it was first released in 2010. It’s sharing the same processor and I/O as the latest Macs now, it’s surely capable from a hardware perspective!

I suspect that Salesforce will make better use of the ‘Pro’ nature of the newer iPads and new iPad software that will be launched over the next few years. Apple’s Q4 2020 report noted that overall global shipments of iPads were at a 13 quarter high of over 51,560,000 units being shipped. People are using iPads at home, in classrooms and in the workplace (be it from home or in the office) more than ever and as Salesforce loves to be on the front foot with new technologies (not to mention Salesforce and Apple have already partnered up in the past to make Salesforce better on iOS), there’s no doubt we’ll find new ways to experience Salesforce on the iPads of the future.

Salesforce on the iPad is an experience like no other. The ability to run the World’s #1 CRM from fully portable devices that weigh around a pound is something we shouldn’t take for granted.

Sure, the latest M1 iPad Pros may not have received the powerful update that a lot of Apple enthusiasts were expecting, but with the changes to Safari that make it feel like a whole new browsing experience and the fact that Salesforce’s technologies are built on modern internet frameworks that run beautifully on iPadOS already, there’s no time like the present to see what the Salesforce Admin experience is like on your iPad.

Previous Post: Which Stakeholders Should Be Involved in Your Nonprofit’s Salesforce Project?
Next Post: Teen to Trailblazer – How to Break into the Salesforce Ecosystem