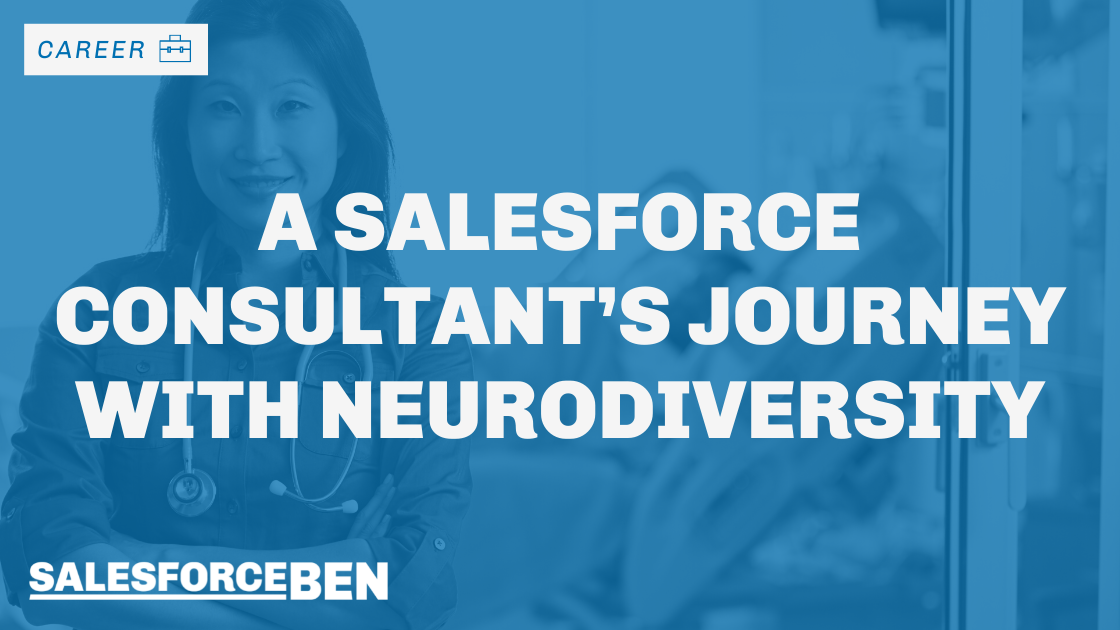 Ever wanted to scream “Why did no one tell me?” Well, I did. I was with half a dozen friends late last year, and they were not acting with the shock, curiosity, or (perhaps) sympathy that I expected. Having known them for over 20 years, I had just announced that I might have ADHD (Attention Deficit Hyperactivity Disorder). Yet, the common reaction was… “Duh!” – a total lack of surprise.

So, how did we get here? And how did such an amazing insight from a long-standing friend seem like a non-event to them? To answer this, we have to delve deeper into the subject of neurodiversity, and I think there are many lessons that I can apply to my work as a Salesforce Consultant. Hopefully, I can pass on some newly-gained pearls of wisdom to you all.

I am a reasonably successful Salesforce Consultant. Personally I define success as being happy in my job, having fun, and being able to keep bread on the table and a roof over my head. But it wasn’t always so. After I quit university, I went through 100 jobs in two years – that’s about one a week!

It wasn’t the happiest time in my life, but I did begin to notice a trend. The period I had a job for, on average, kept getting longer. What started out as a one-day gig, became two days, then a week, and so on, with inevitable bumps and resets along the way.

What was happening? Each time, I was learning a little more. I took the learnings from the previous job, chose a little more wisely (along a path that I liked), and applied those lessons from Day 1 at the next gig.

Stepping back and realizing this opportunity for growth helps me draw comfort when knockbacks happen – at least I continue to learn.

The Elephant in the Room

I’m not talking about our friend Ruth the Architect here, although there are parallels. When Salesforce started out there was no need for an Architect. But gradually, additions to the functionality were made, and then there was a need for Salesforce Architects! It just happened so slowly that most people didn’t notice until it was an urgent requirement.

Something similar happened with ADHD. When I grew up in the 1980s, the only people I understood to have ADHD were those literally standing on tables screaming at the top of their lungs. Societal awareness has steadily improved. Now I understand that symptoms of ADHD can include:

It’s like needing reading glasses – a small problem with eyesight doesn’t necessarily mean that you need glasses. However, when the problems increase and your symptoms tick a certain number of boxes, then it’s far more likely.

But no one had told me, even as awareness generally improved, and I didn’t notice either. Eventually, it became the ‘elephant in the room’ – when something is so big and obvious that no one actually talks about it. People meeting me in relatively recent times must have assumed I already knew. I have Twitter to thank.

I had been trying to diversify my Twitter feed, following recommendations from BetterAllies, and I found myself drawn towards people with ADHD. Curious, I mentally put it on a pile of things to investigate ‘later’. In a parallel track, I had also begun to investigate the long-standing sleep problems I had been having, as you can see in the photo above. A clinic offering a potential treatment said I would have to pay the cost myself unless I happened to have ADHD, in which case my insurance would cover it.

If there are enough hints and pointers, sometimes it’s good to listen and to reflect. I decided to investigate further and do a formal assessment. You can guess the result. When talking it through with my friends afterwards, they answered along the following lines: “I thought you knew”.

So, here’s the big lesson: Never presume anything, and always check that everyone is aligned and on the same page. There are two reasons:

I see this issue of presumption in all of my projects, from small to extremely large. When things go wrong it is because of communication failures, often from assumptions such as who’s doing what and where the authorization and accountability channels lie.

I have always said that I feel tired in the morning and I’ve undergone sleep tests. If I had used the expression ‘brain fog’, it might have triggered one of the many doctors I have seen to suggest ADHD. That’s because ‘brain fog’ is commonly used in ADHD literature. Be mindful of what people mean, not just what they say.

Here’s something I learned early on and always apply now: I take backups and export entire objects before deleting data, just in case the customer changes their mind or I have misunderstood the requirement.

There is no expensive crockery or glassware in my apartment. I’m clumsy – to be exact, it turns out I have DCD (Developmental Coordination Disorder), also known as dyspraxia. It’s a lifelong condition – not going to change – therefore I design out the risk of breaking valuable items.

Speaking of those many jobs, eventually, I realized that I was probably on the Autism spectrum. It can show itself in different ways (that’s the ‘spectrum’ part). For me, this means that when I go job or contract-seeking, I explicitly tell people that I’m very direct and don’t interpret non-verbal cues very well.

But it also gives me insight. I’m not the only neurologically diverse (neurodiverse) person in the world. One US survey states that 9.4% of children have ADHD, and that’s before you include dyslexia, autism, and other conditions.

I’m particularly aware that I’ll be working with many people that don’t fit into a neat box of ‘one size fits all’ behaviour.

When meeting someone for the first time, I often ask what style works best for them to ensure I have their needs catered for, or I use a mix of techniques by default:

You can learn more about these in Vicki Moritz-Henry’s article on how to become a better trainer – the same lessons apply for many other roles in life too.

The great news about all of this is that it increases the diversity of perspective. As with any challenge, if everyone thinks and acts similarly, then the likelihood of solving the problem in the most effective fashion diminishes dramatically.

Here are some common strengths and challenges of those who are ‘neurodiverse’ – it’s all part of the same pie, and you don’t get one without the other.

Original image with thanks to Professor Sara Rankin and the Wellcome Sanger Institute.

So, I have ADHD, as do many people in the IT industry. In fact, when researching, this particular tweet stood out for me:

There is also a recent Salesforce Admins podcast that includes various hints and tips from Joe Sterne, a Solution Architect at Salesforce.

Having a diagnosis is empowering for me. It helps me understand myself. It also gives me something to investigate as I seek out suitable tools to manage the elements that I find frustrating. I’m rather excited!

P.S. Thanks to various friends who reviewed this article and gave recommendations. I was surprised to discover how many people I know with ADHD, or who have relatives with ADHD. Let’s keep the conversation going.

Previous Post: Want to Influence the Salesforce Winter ’23 Roadmap?
Next Post: Everything You Need to Know About Salesforce Case Scoring

2 thoughts on “A Salesforce Consultant’s Journey with Neurodiversity”