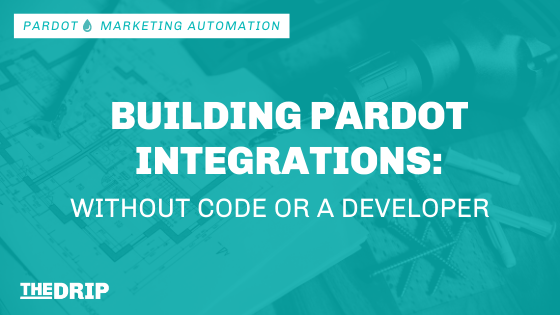 David's career history includes a decade of Salesforce admin experience, a seven-year stint as a marketing operations consultant and speaking at various user groups and conferences such as Pardreamin'.

Any automation, within or beyond Pardot, involves a trigger and an action. Think automation rules, Engagement Studio, or Salesforce Flow if you are more Salesforce-minded. What if the trigger can be just about any event that occurs in any part of your tech stack, not limiting you to the criteria you can select in Pardot.

Early last year, I felt a bit stuck in my career. I had earned a variety of certifications, joined numerous Slack communities, became active in the user group scene, and even presented at a user group. The skillset I had developed enabled me to spend a lot of my time managing our martech architecture, systems integration… You know—the fun stuff.

But if I was being honest with myself, I wasn’t 100% sure I wanted to spend the rest of my career doing exactly this. I hit a peak, of sorts, with marketing automation (MA). And while I loved the logical, interconnective, and systems-thinking aspects of Pardot and the broader martech ecosystem, I was kinda left wondering what the next step in my career should be.

I had visions of bigger, cooler projects that require developers, APIs, and cross-platform data workflows—things like getting my customers’ product usage or transaction data pumped into Pardot so I could use it for targeting…or building custom logic to automatically flag new prospects whose email domain matches the website of one of our Target Accounts in Salesforce. I knew those were the projects that could really change the game.

At the same time, I knew that these bigger, cooler projects tend to move slowly because they require technical resources over whom I didn’t always have direct control. As a result, I often found myself thinking how nice it would be to have somebody on my team who could actually write code.

“Maybe I should learn to code,” I’d muse from time to time. I enjoyed coding… at a conceptual level, at least. I had an affinity for process and logic. There’s a certain elegance to Operations. But learning to code would take a lot of time and effort. Plus, I had a feel for what coding is like… and it didn’t exactly seem like something I really wanted to be doing all day long.

As it turns out, there was another path. After joining Workato last year, I found that I could use the platform to build the cross-platform data workflows that my more ambitious projects called for—and not worry about writing any code. 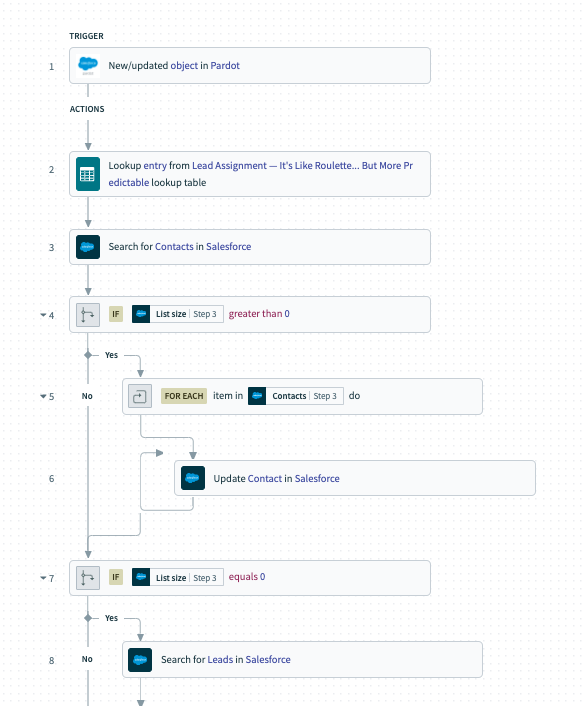 These workflows are called recipes. Each recipe has a trigger and a series of actions that should take place whenever the triggering event occurs. The trigger can be just about any event that occurs in any part of your tech stack (ex: prospect added to list in Pardot, opportunity marked as “closed won” in Salesforce, or new webinar registrant in Zoom). And then the actions specify what should happen following the trigger event (ex: query Salesforce for accounts with a website matching the prospect’s email domain, sync opportunity details over to Netsuite for the Finance team, or add prospect to list X in Pardot).

Pardot Integration with Your MarTech Stack

So, what does wall-to-wall automation look like within the context of a martech stack?

As luck would have it, I partnered with Sara McNamara and Mike Creuzer on a presentation at Pardreamin’ 2020 that tackled this very question! Here are the specific automations we shared and that you, a Pardot expert, might fancy trying.

The screenshot says it all for this one. 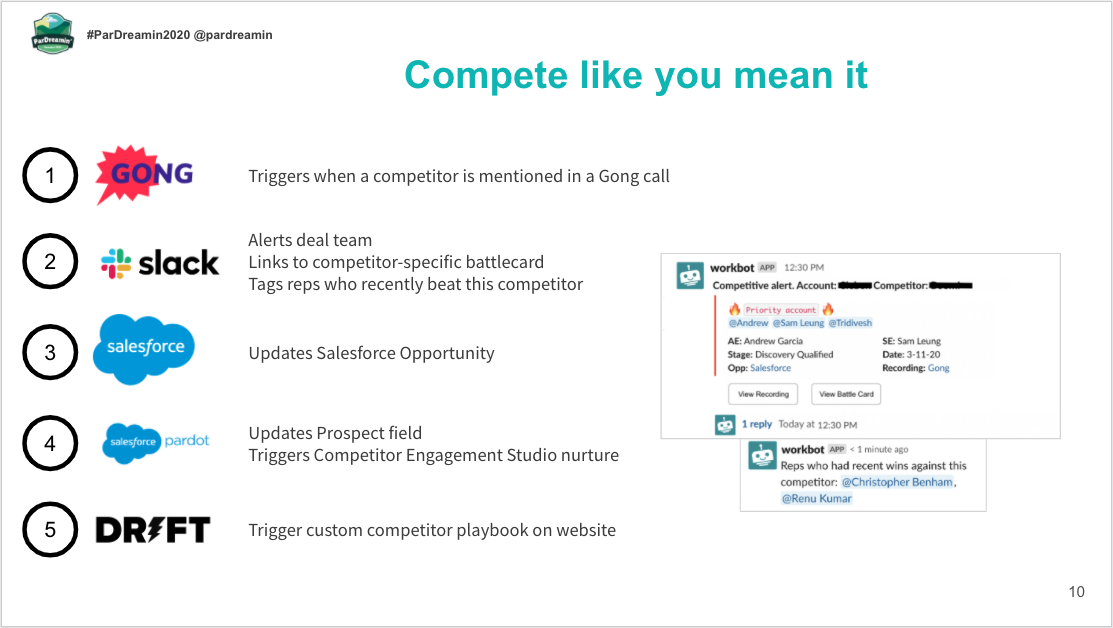 One of the most basic requirements for doing ABM is a way to match prospects to existing accounts—target accounts or otherwise. One effective way to do this is to take the prospect’s email domain and query Salesforce, or even just a spreadsheet that holds a list of all your target accounts’ domains, to see whether there is a match for the prospect’s email domain. Traditionally, custom code has been required to execute this sort of logic. But that’s no longer the case.

Sara McNamara recounted a personal experience with this: “In a past life, when I was handed a sheet of target account names and was told to somehow mark all incoming leads as target accounts where applicable with a short SLA, Mike and I put together a workflow similar to the one on the right. Using Heroku and code, we were able to set up an automation that is essentially a lookup table to an Excel sheet of domains — this way, end users could very easily update the target account list whenever they wanted. If you don’t have a developer like Mike, you can accomplish the same lookup table sheet automation within Workato, using clicks instead of code. If you’re fancy and have an ABM platform already in place, you can use Workato to integrate them and their target account mapping instead.” 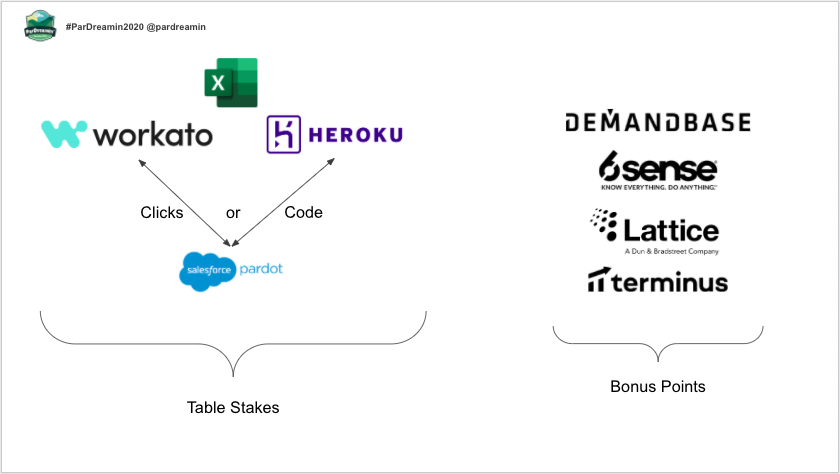 Customer marketing is increasingly important these days, especially if you work at a SaaS company. One of the most powerful data sets you can bring into Pardot as a marketer at a SaaS company is your customers’ product usage data. 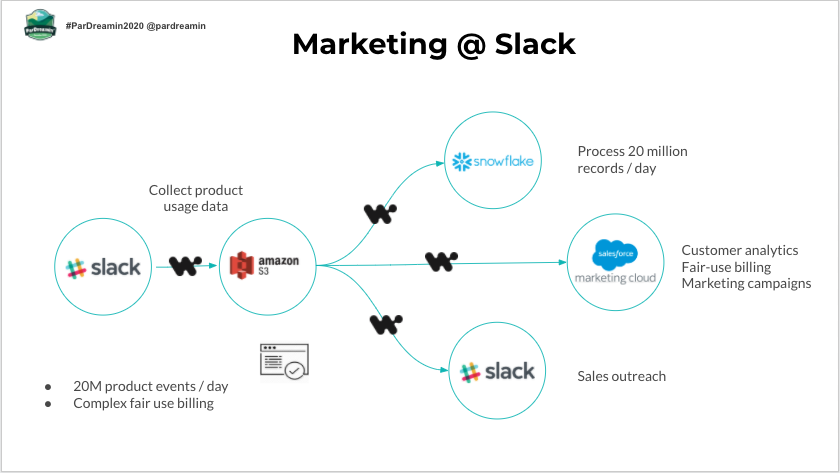 Harvard Business Review famously (in the Marketing world, at least) published a study showing how impactful it is for a business to follow up with your leads in 5 minutes or less. Even the one-hour mark was a dramatic difference compared to the rest of the cohorts: “Firms that tried to contact potential customers within an hour of receiving a query were nearly seven times as likely to qualify the lead (which we defined as having a meaningful conversation with a key decision-maker) as those that tried to contact the customer even an hour later—and more than 60 times as likely as companies that waited 24 hours or longer.” 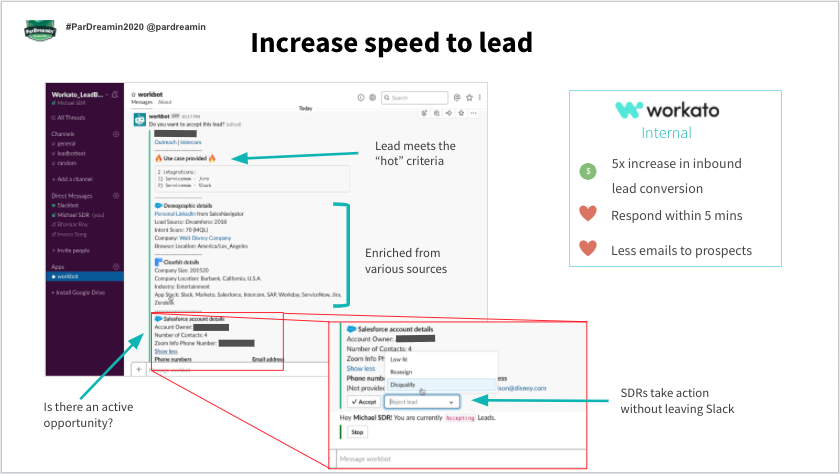 With all the webinars going on nowadays, it’s important to automate as much of the process as possible—whether it’s related to planning the event, executing it, or following up with attendees afterwards. 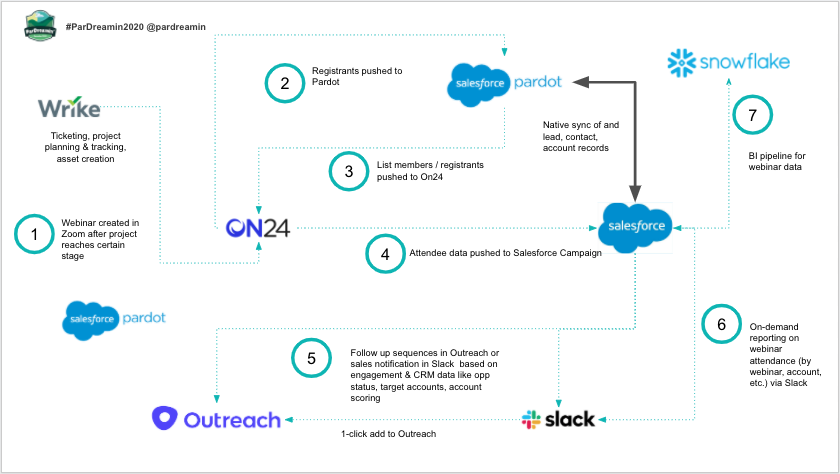 There are so many more automations you can build around Pardot. Are there any others you’ve tried and have seen success with? Are there any that you’re thinking about implementing? Let me know by leaving a comment below!