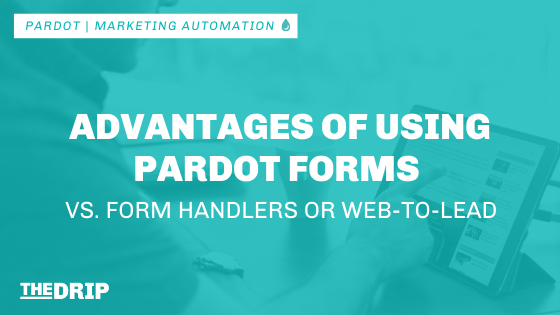 Pardot Forms are the native option for creating lead capture forms in Pardot. Using a Pardot Form means you can take advantage of pre-filled fields, progressive profiling and other advanced features – however, despite the multiple benefits up for grabs, they are not always the default choice.

When Pardot was brought into your organisation it was agreed, either explicitly or implicitly, that Pardot would be used as the core marketing tool that generates, nurtures and converts prospects. Capturing prospect data through form submissions most likely appeared in the agreement.

Other options for data collection offer Pardot customers the option to integrate their existing form infrastructure with Pardot, namely Pardot Form Handlers or Salesforce Web-to-Lead. While these options are accommodating, when favoured instead of Pardot Forms, marketers miss out on the benefits before they’ve even had a chance to test drive Pardot Forms! So, this leads us to ask: why do organisations overlook Pardot forms?

Organisations may overlook Pardot forms for a number of reasons, but often it’s in favour of Salesforce Web-to-Lead forms.

Web-to-Lead forms are integrated with Salesforce Sales Cloud, so a form submission generates a lead record immediately in Salesforce.

Unfortunately, people approach the subject of switching to Pardot Forms with the view: ‘if it’s not broken, don’t fix it’. This mentality goes against why organisations switch to Pardot (in that, Pardot would be used as the core marketing tool).

Salesforce Web-to-Lead Forms are not the best option when you have Pardot. Here’s why.

Salesforce becomes full of leads over time, that may or may not be possible for sales to convert and, unintentionally, it can subtly change the sales team’s way of working the data. Instead of a sales team that’s excited to see new leads and confident they’re workable, there will be scepticism. A bad culture of distrust builds, leading Sales prioritise their own leads, as in their eyes, it’s what will win them their commission, not marketing-generated leads directly from a form completion.

Use a Pardot Form Handler when you need to integrate an existing form on your website with Pardot. A Form Handler works in a similar way to a web-to-lead form: you generate a snippet of code that gets pasted into the external form’s code. In Pardot, the Form Handler acts as a bucket that will record successful prospect submissions.

Pardot Form Handlers are not the best option when you have Pardot. Here’s why.

Note: If you require a form that asks a user to create a password, upload a file or give sensitive information, then a Pardot form shouldn’t be used. Form handlers should be used instead, but a form integrated with Pardot nevertheless!

Pardot Forms to the Rescue

By using Pardot forms, you gain control. Lead records are generated when they should truly be leads and are sent to the right salespeople at the right time. Ultimately, your Salesforce database remains clean and full of leads so the sales team can feel confident in their marketing team.

Further to the control you gain with Pardot forms, they’ve actually got a whole range of high quality features that are well worth utilising. After all, you’re paying for a top of the range tool so you would be foolish not to consider taking advantage of the features. Pardot forms have the following features:

We set out to answer the question: why do organisations overlook Pardot forms? Often this is down to strained time, team capacity, a complex or large form infrastructure that was in place pre-Pardot – but worst of all, a mentality of ‘if it’s not broken, don’t fix it’. These views go against why organisations switch to Pardot (in that, Pardot would be used as the core marketing tool).

I appreciate that there may be exceptions to the rule here. Some organisations have valid reasons why they need to stick with their existing data collection choice; however, for the most part, your organisation will be able to migrate to Pardot forms entirely, partially at the very least to reap the best benefits.

Previous Post: Leveraging Pardot in a Post-COVID World (Towards the Next-Normal)
Next Post: How to Create a Filtered Data Extension in Salesforce Marketing Cloud