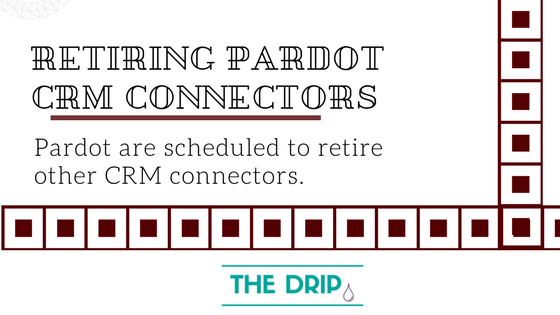 Pardot are switching off all CRM connectors, leaving Salesforce as the sole player in the field.

Pardot will be cutting ties with other CRMs that it had the ability to ‘connect’ with, namely: SugarCRM, NetSuite & Microsoft Dynamics. This now leaves one CRM connector – Salesforce. The connectors were inherited as part of the acquisition, when Exacttarget was scooped up by Salesforce in 2013.

Actually, no. one of Salesforce’s core beliefs is customer communication and trust. The end-of-life notice was issued back in August 2016, a notification banner pushed via the Pardot Dashboard, as well as targeted email reminders. Plus, whilst these customers can no longer sync their two systems declaratively, there was advice administered on two options: API integration, or periodic manual import. Remember, connectors are not the same as integrations: connect no, integrate, yes! But the end of an era, no less.