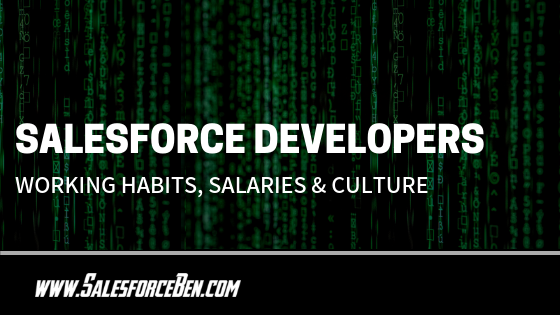 Andy Mason is the Director of Mason Frank International, a specialist Salesforce recruiter. Andy has assisted with the staffing of hundreds of Salesforce projects around the world.

Mason Frank’s 2018/19 salary survey revealed some interesting findings on the culture of Salesforce Developers. In this article, we explore how education, employment, and career development compare to other roles within the Salesforce ecosystem, and suggest ways to access higher earning potential based on the success of your peers.

It’s been a strange year for Salesforce Developers, but an exciting one nonetheless. We’ve seen product and partnership announcements, certifications retired, and a number of new features introduced along with Salesforce’s seasonal releases. What’s more, as the Lightning platform is embraced further by Salesforce users around the world, we’re seeing changes to how Developers work on a day-to-day basis.

With the demand for Salesforce professionals ever increasing, there’s never been a more prosperous time for Salesforce Developers. Whether you’re an Admin looking to delve further into the technical side of Salesforce, or a Developer on a mission to expand your portfolio and expertise, here is a selection of findings from Mason Frank’s salary survey. Taking note of these could benchmark your current career standing, clarify whether you’re exploring your earning potential, or even help you discover your next challenge in Salesforce. 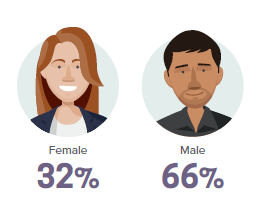 Mason Frank surveyed over 2,200 Salesforce professionals in its annual survey, and just under 14% of those were Salesforce Developers. The majority of respondents were Administrators or Consultants, which suggests that the common career route for professionals is to begin as an Administrator on the platform before moving to a more customer-facing role. Nevertheless, 14% is still quite a high proportion compared to other positions under the Salesforce umbrella.

Salesforce is a champion of diversity and has long been a proponent of encouraging more women into tech roles. While 32% of overall respondents to the survey were women, just 14% were Salesforce Developers. This is interesting considering that Parker Harris, Salesforce co-founder, stated in his 2018 Dreamforce keynote that 48% of the Admin community are women. It appears there may be a disconnect for women moving into technical development roles. 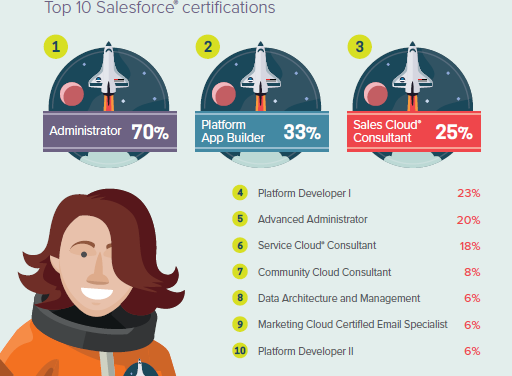 It’s no secret that attaining certifications will allow you to explore your earning potential, and the findings support this. Of all certified respondents, 39% reported an increase in salary after certification, with 75% benefitting from their employer contributing to the cost of certification.

Force.com certifications were officially retired in April of this year, with Salesforce Developers afforded the option of transitioning their credentials for free. However, Mason Frank found that only 48% of Developer respondents had taken up the option, with 19% unaware that this was a possibility.

Annual salaries and daily contract rates do deviate largely from state to state in the US, and we can see this from the range at which contractors are paid—contract Salesforce Developer in the United States can earn anywhere from $79–$138 an hour. This covers all experience levels, so you would expect there to be a gap between the higher and lower limit, but if you take into account higher cost of living and demand for Salesforce resource in certain areas (think California and New York), the deviation is a lot more understandable.

One of the ways you can explore that higher earning potential is to be a mover and shaker. If you’re happy to work on a contract basis, relocating to areas with high salaries but a low cost of living can pay dividends. For example, Boston, MA posts salaries only slightly lower than that of California, but the cost of living is way lower, so you would likely end up with a greater amount of disposable income at the end of the month living in Boston than California. To calculate a city’s cost of living against your current location, check out this COL calculator tool from Expatistan. Remember, it’s important to base your research on several sources before making a decision.

The research is clear. Always be moving towards a technical role, pursue the advanced certifications, and seriously consider becoming a contractor if you want to truly explore your earning potential as a Salesforce Developer.

For a full exploration of salaries, benefits and market trends across the Salesforce ecosystem, download the Mason Frank 2018/19 independent Salesforce salary survey in full from the company website.

Previous Post: How Travel Companies can use Salesforce to Transform Customer Journeys
Next Post: Salesforce Sphere – December Round Up of the Top Blog Posts!