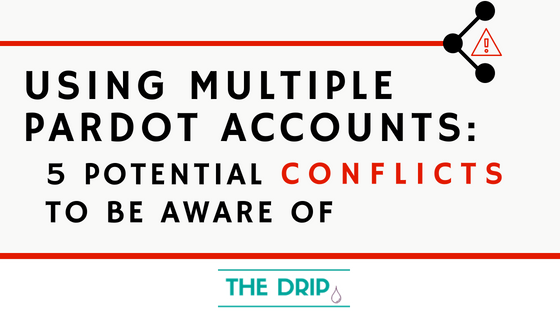 Organisations with multiple business units and/or regions would naturally consider having more than one Pardot account. The benefits are clear: controlling prospect data sharing between divisions, marketing assets available for use, and access to performance reports.

To even think about using multiple Pardot accounts, you must first have a strong business need for it. Don’t embark on this setup half-heartedly, if it’s only a ‘nice-to-have’. You will find that sticking with one Pardot account to one Salesforce org will save you many headaches down the line.

Where having multiple Pardot accounts is a non-negotiable need (ie. in larger corporations), there are 5 pesky things you should be aware of before you connect up. After reading this, you may reconsider…

When connecting Salesforce and Pardot, you will be dealing with multiple objects: ‘Leads’ & ‘Contacts’ on the Salesforce side, and ‘Prospects’ on the Pardot side. Leads/Contacts have ‘record owners’, and prospects have ‘assigned users’.

When it comes to setting the owner of these records, Salesforce is the master. Normally it’s an easy relationship, where the newly created Lead will inherit the assigned user the Prospect, from Pardot. Or, a Prospect will inherit the record owner from it’s matching Salesforce record. If and when a clash in ownership occurs, Salesforce will force a ‘reassignment’ onto the Pardot record.

The key thing to remember: it’s down to which Pardot account/s the user exists. If a Lead/Contact record is syncing with a Pardot prospect, which sits in a Pardot account where that user does not have access, simply the user cannot be assigned to that Prospect.

The result? The prospect is unassigned in Pardot.

Those of you that are switched on will know that is not good. The prospect is unable to sync back to Salesforce, unless it has an assigned user…

It’s great to give visibility into a prospect’s marketing score and grade to users on the Salesforce side, for them to use in lead qualification and prioritisation.

Lead/Contact records display their associated prospect’s score/grade, which is updated when a prospect record sync occurs.

Which prospect does Salesforce take as the source of truth? In other words, which score/grade will it display on the Lead/Contact?

The key thing to remember: it will use the first prospect record it synced with.

Evidently, this will cause disparities, misleading information and possibly miscommunication.

When syncing field data between Pardot and Salesforce, you can define a field’s sync behaviour. This tells the Connector which system it should consider the master when clashes happen.

There are 3 options for sync behaviour:

Field sync behaviour doesn’t count for much. When clashes happen between Salesforce and Pardot values, the Connector will default to Salesforce as the master*.

Exactly like giving visibility into a prospect’s score and grade, having Pardot prospect activities visible in Salesforce shows the whole communication timeline for that Lead/Contact.

A user will only be able to see the Prospect activities from the Pardot account they have access to. Makes sense technically and in terms of security, but will mask marketing activities across other business units that use separate Pardot accounts. Could be an issue for some organisations.

As you know, Prospects can be created either by:

There’s 3 ways Prospects get created in Pardot from Salesforce:

Again, it’s down to which Pardot account/s the user exists in.

This post has covered 5 things you should be aware of before you connect up – or even consider – using multiple Pardot accounts with one Salesforce org. Of course, a few of these rules/limitations/behaviours make sense technically, but they are likely to cause frustrations to system administrators and business users. Maybe this will be cleared up as the two tools come increasingly closer together, but until then, closely assess your business need for having more than one Pardot account, and don’t embark on this setup if it’s only a ‘nice-to-have’.

Previous Post: TIL: When & Why Scoring Changes are missing from Prospect Activity
Next Post: Pardot Einstein: What We Know So Far (and some speculation!)