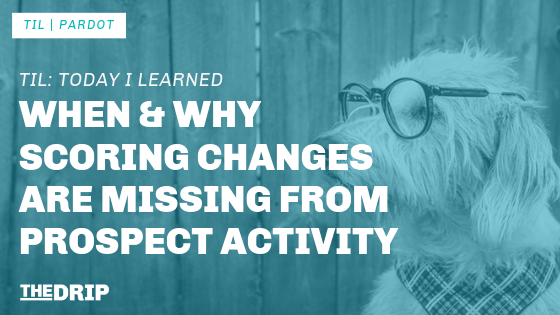 TIL [Today I Learned]: Short & snappy posts that boost everyday Pardot use.

Have you ever looked at a Prospect’s record and noticed that something doesn’t add up with their activities and score changes? The Prospect’s overall score has increased (incremented), but each activity in the activity section has a ‘0’ beside it…

As you can see in the image below, the prospect has taken 3 activities and their score has increased by 10. At first glance, it’s a mystery where this score increase of 10 came from!

As a Pardot Consultant, it’s something I’ve known for some time, but still doesn’t fail to stump me for a split second each time I come across it!

There’s a logical explanation for why this happens, which I will share now…

Prospect score adjustments (increase/decrease) can happen for a number of reasons – a prospect submits a form, opens an email, clicks a tracked link.

Although these appear the same from the Prospect’s point of view, how the score change is recorded in Pardot depends on how the admin set it up.

There’s a difference between:

Actions that the prospect took

The score is adjusted when the prospect does something, and the score is changed in line with the baseline scoring model of the Pardot account. (You can view this by navigating to: Admin → Automation Settings → Scoring).

Applied to the Prospect through Automation

The score is adjusted when an automation runs with an action of ‘Adjust Prospect score by’. This can be through a running automation rule (like the image below), or as a completion action set on an email, form etc. 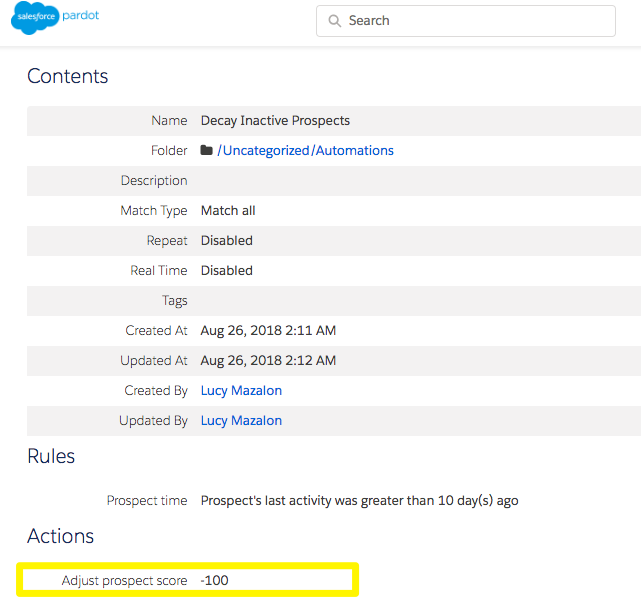 A score change caused by an automation will not appear in the prospect activities section because it is not an activity a prospect took – it’s an action an admin applied!

By clicking on the overall score on a prospect’s record, you will be able to view which types of assets (emails/forms etc) caused the score to change.