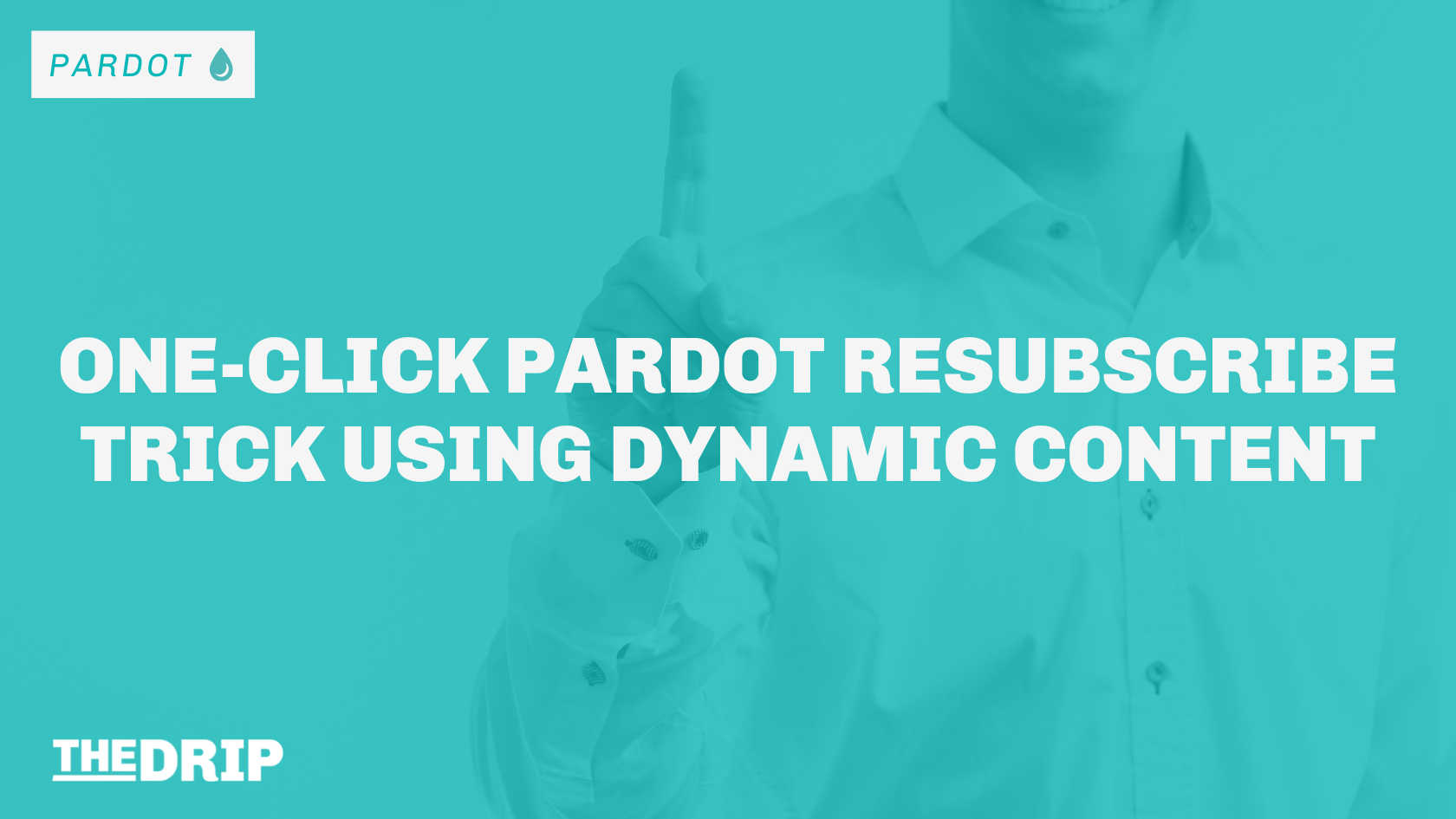 Prospect Resubscribe is one of Pardot’s most intriguing mailability features; using automation rules, engagement studio, or completion actions, you now have the ability to modify the previously off-limit ‘opted out’ and ‘do not email’ fields.

This prospect resubscribe feature has more customization capabilities on the way (Winter ’22 release), which will allow customization of the prompt, button text, and confirmation messages.

However, there are limitations:

These limitations are all quite reasonable in the context of why the prospect resubscribe feature works as a two-step process. If resubscribe were a one-click process, in theory, anyone could enter anyone’s email in a form field and resubscribe them.

I’m going to show you how to allow prospects to resubscribe themselves on your website, no matter which form type – all with a single click.
The key to making this work is to update the opted-out field using a completion action.

And, as you may have guessed, the form and message do not show to anyone who is opted in. Therefore, it’s completely invisible and unusable except for those it applies to.

Note that this method does not require you to have prospect resubscribe enabled – you can have it enabled but it doesn’t play a part in this method.

Here are the elements you need:

The first thing we will create is our form – this is simply a Pardot form with one field: email. You can even use the description field for your message:

“We noticed you’re opted out of email. Would you like to opt back in?”

You can use any formatting you like here; use your layout templates to match your site, add above- and below-form messages, set your ‘thank you’ text, and so on. It’s going to work just like any other form.

Other recommended settings for the email field include making sure the field is “always displayed even if previously completed”, and the “do not prefill” option is unchecked. We want the cookied prospect’s email address to autofill in the form – then, all they have to do is click submit. 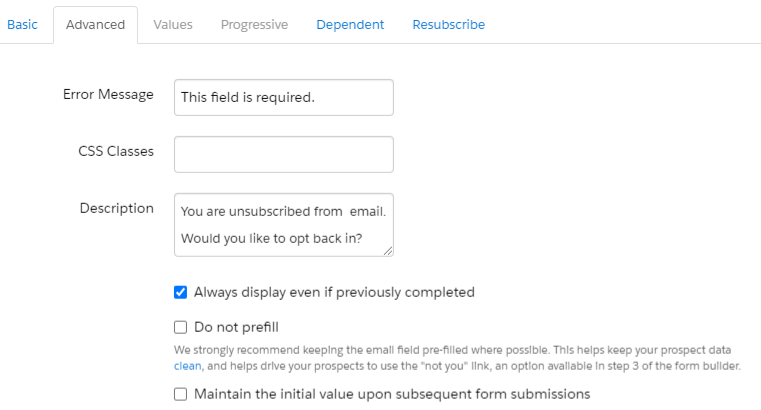 Finally, if you have prospect resubscribe enabled, make sure the message does not appear on this form – go to the resubscribe tab and uncheck the “Give unsubscribed prospects the chance to resubscribe” – we’re going to do things differently with this form.

Now for the new magic, which has been enabled by the mailability upgrade – following the option selections below, set your completion actions for this form to opt your prospect back in when the form is completed.

Note that we’re changing both the ‘opted out’ field and the ‘do not email’ field here. One artifact of the upgrade to the mailability settings is that often an opted out person would have both these fields set as true, so we want to make sure they are both cleared.

I’ve also included a placeholder there for the autoresponder even though we haven’t made it yet. Remember to come back and add that completion action after you’ve built your template.

You might also want to add a completion action to remove points from the score (AKA score decay). Since it counts as a form fill, points will get added according to your baseline scoring model – so this completion action will subtract those points as soon as they are added, and therefore, minimize this action on a prospect’s score

Next, grab the embed code for this form – we’ll need it for the next step.

Create the Dynamic Content (for Opted Out Prospects only)

The dynamic content is extremely simple. We only want to show something when the person’s ‘opted out’ field is “true” (or in the case of this interface, “on”).

So, the default content is blank, and the only content that’s shown is when opted out is True. Note that we should use opted out as the field and not do not email for this condition, because we only want to show this when the person has explicitly opted out themselves. Under the new mailability rules, do not email is intended to be used for purposes such as double opt-in or CRM users to marking prospects to be suppressed from mail. So we only want to show this to people who chose to be opted out.

To add our form as dynamic content, use the <> option in the text editor and paste in your embed code (from the previous step) to embed the form. You can of course add other text to the dynamic content to go along with your form, or you can just use the content rendered by the form. 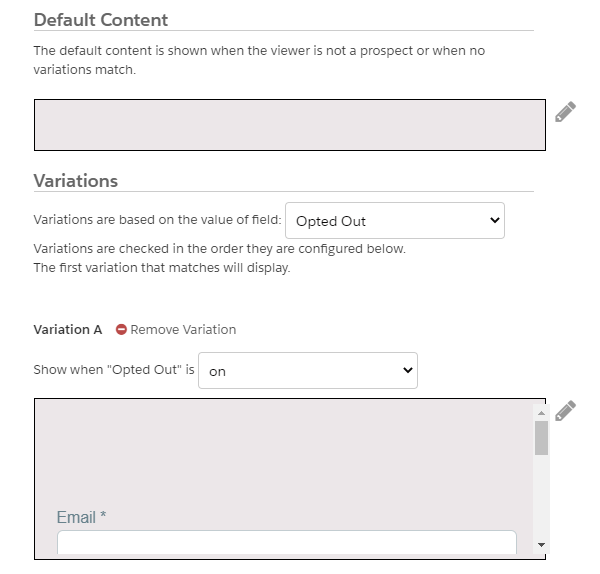 Copy the script from “view embed code” for use on your website.

Unlike the regular resubscribe template process, this autoresponder doesn’t actually do anything other than confirm that the person has opted back in. You don’t have to use the resubscribe link here, because the form’s completion actions have already opted them back in. Sending the autoresponder in this context has several benefits:

No matter what you decide to communicate in your autoresponder, make sure you remember to add it to the completion actions on your form.

Now that you have created your dynamic content, you can use the embed code on your website. Note that this is not like a regular Pardot tracking code – it needs to go in the page’s layout in the spot where you actually want the form to show up. So, you have to make sure that when that form pops up it “fits” in the layout appropriately. Test and verify!

What does this dynamic content do when embedded on a website? Because the dynamic content only displays to a prospect with opted out = on / true, it will only show to a cookied prospect that has opted out. This means that it’s nearly impossible for this message to display unintentionally to the wrong prospect, and everyone else sees nothing.

So, you can use this dynamic content anywhere in your website layout – anywhere you want this invitation to show to opted out prospects. It can be used in footers, popup messages, banners, inline in the layout – wherever you want to let a (cookied) prospect know that they’re missing out on all your great content because they unsubscribed. This is a great way to remind people that they actually are unsubscribed (many won’t remember).

It’s probably best to avoid placing this option on pages where you would prefer the prospect to fill out other forms instead (landing pages or contact forms, for example). I would recommend that you use it just enough to be noticed – but not to the extent that it becomes an annoyance, as this message will be persistent until the person opts back in or clears their cookies.

A Variation on the HML Trick

Remember the HML workaround trick for resubscribing that I mentioned earlier? If you have dynamic content, there’s an even simpler method to include a “you’re opted out” message on your autoresponders and operational emails.

Since you can also use dynamic content in email, you can create a dynamic content block that once again only shows to people where opted out is “on”. But instead of using {{Resubscribe}}, simply include a message with a custom redirect link. 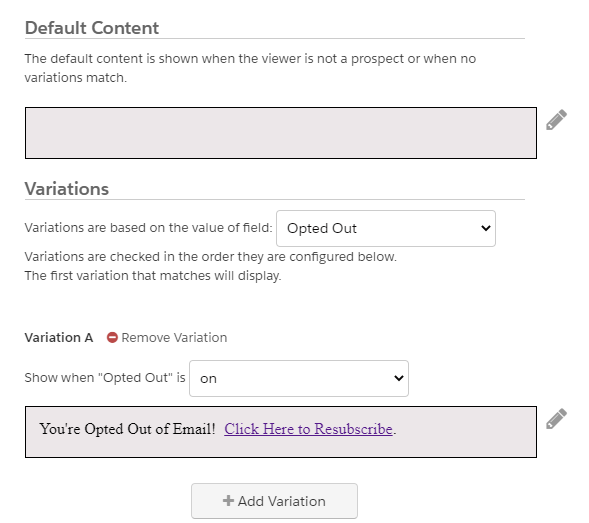 This custom redirect has a completion action that changes opted out and do not email to false, and sends the prospect to a success landing page that says: “you’re opted back in”. 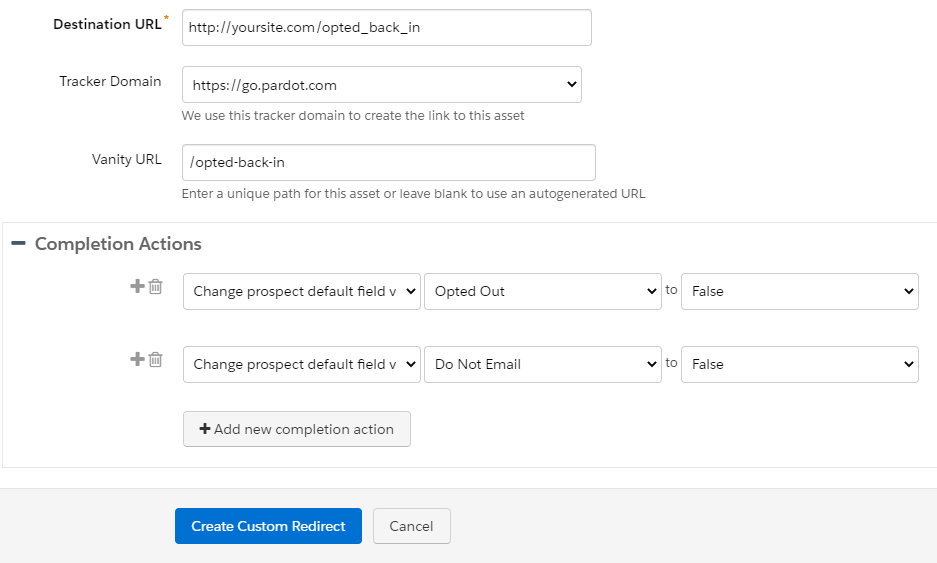 This accomplishes the opt-back-in with a single click, bypassing the need to send a resubscribe email.

Again, I recommend only using this when opted out is true, and not when do not email is true, because if you sent an operational email, which under the new mailability rules allows sending to prospects marked as do not email, you might not want to override your CRM user’s preferences or your own double-opt-in process.

This brand-new method, which leverages the new features of the Prospect Mailability Upgrade and dynamic content, is a great supplement to the prospect resubscribe feature, especially as it can be built and launched quickly. It can be easily deployed selectively on your website and only reveals itself to the relevant people. This method can also act as a complete replacement for prospect resubscribe if your website uses Form Handlers, since resubscribe only functions with Pardot forms.