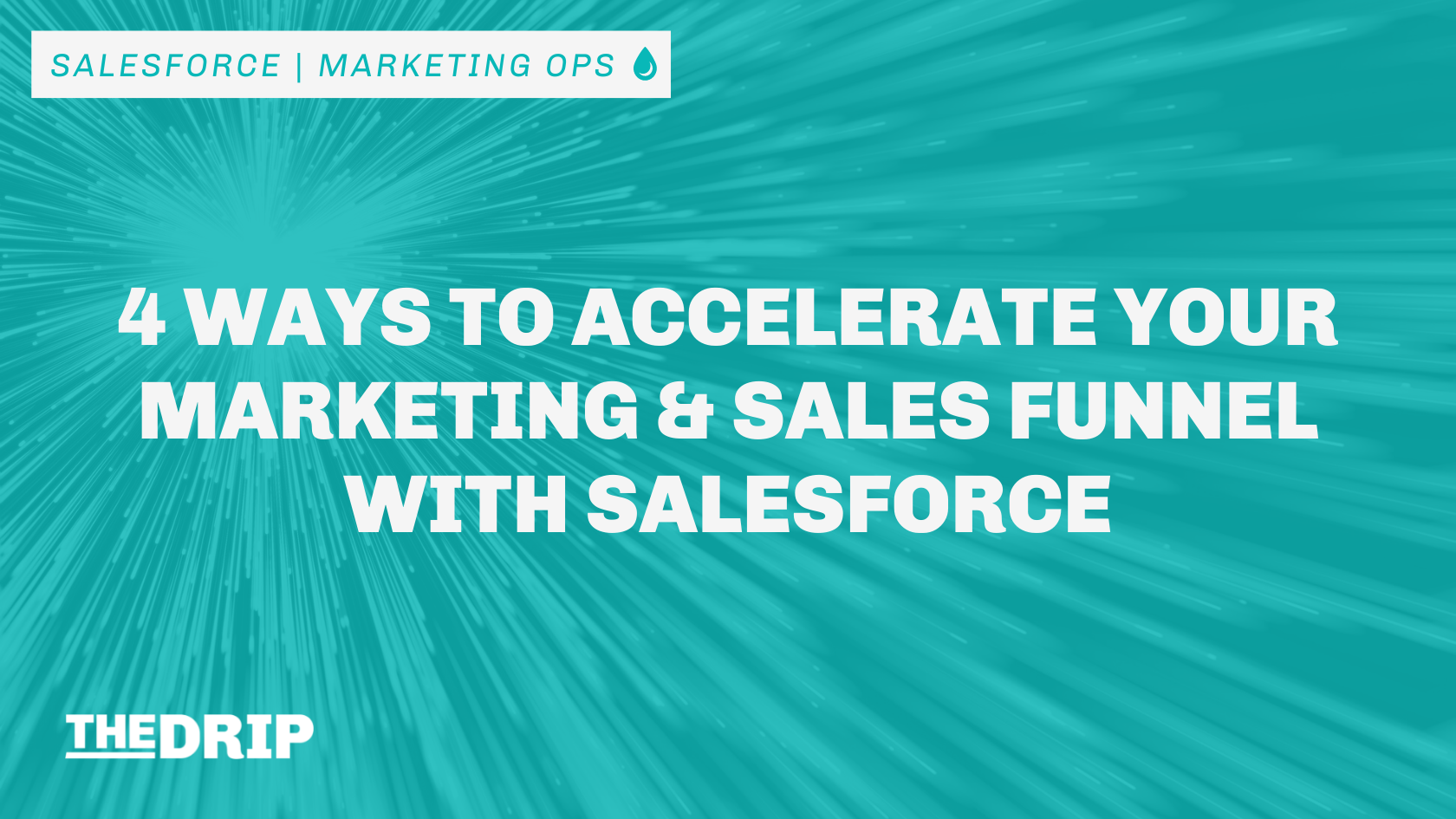 It’s no secret that a faster funnel means more conversions, more meetings, and more “closed won” deals. However, if accelerating your funnel was easy, then every company would already be achieving this.

To help answer the questions of where do you start and what are the proven best practices to help accelerate your funnel, Lucy Mazalon, sat down with Craig Jordan, Founder & CEO of SaaScend on a Salesforce Ben hosted LinkedIn Live event.

In less than 30 minutes, Craig gave the top four ways that teams can increase their funnel velocity, from where they should start, to where they can optimize for the best results.

Your marketing and sales funnel will not accelerate, if you have not at least first mapped it.

Identify the stages of the buying process. These can vary based on if you are doing transactional selling, enterprise selling, or are in the middle, but knowing who you are, how you are selling, and the key stages that happen during the process is how to get started.

Mapping your funnel includes the stages that occur before a lead converts and enters the pipeline. Taking the top of the funnel into consideration will give insight into how long it takes from when a visitor first converts to a prospect, to when they become a customer.

Map your funnel in combination with your marketing automation system and with Salesforce. Using the two will show the actions that a prospect takes to advance them further in the funnel as well as enable marketers to trigger relevant campaigns that speak to the current stage of the buying process that the prospect is in. Salesforce can assist with velocity tracking, reporting, and data visualization.

Taking the first step to map your funnel empowers your team to standardize their processes, resulting in predictability, a benchmark for your funnel velocity and your rate of conversion between each stage.

Once the funnel has been mapped, it is time to implement lifecycle stages which are the functions within your funnel, the stages that you defined when you completed the funnel mapping exercise.

Craig shared his standard five, Prospect, MQL, SAL, SQL, and Customer. The terminology can be changed based on how your company communicates internally, for example, calling a Prospect a Lead, but the concept or definitions are the same.

PRO TIP: A healthy MQL acceptance rate for marketing to aim for is 75%. A custom field on the Lead record can be used to give sales the ability to share why they are rejecting a lead. Use a dropdown picklist to standardize the data to make improvements and adjustments to future MQL criteria and improve the rate of conversion from MQL to SAL.

Your company may have more intermediary stages especially if the business model includes a free trial phase, but the importance is that the stages are defined and understood by the team.

Once the stages are defined it is time to implement them into your org. Craig recommends using a custom object in Salesforce, to track the data at a granular level and overcome the natural challenge of disparate object data of Leads and Contacts. The custom object allows for unified data so that the team can report on the full funnel. 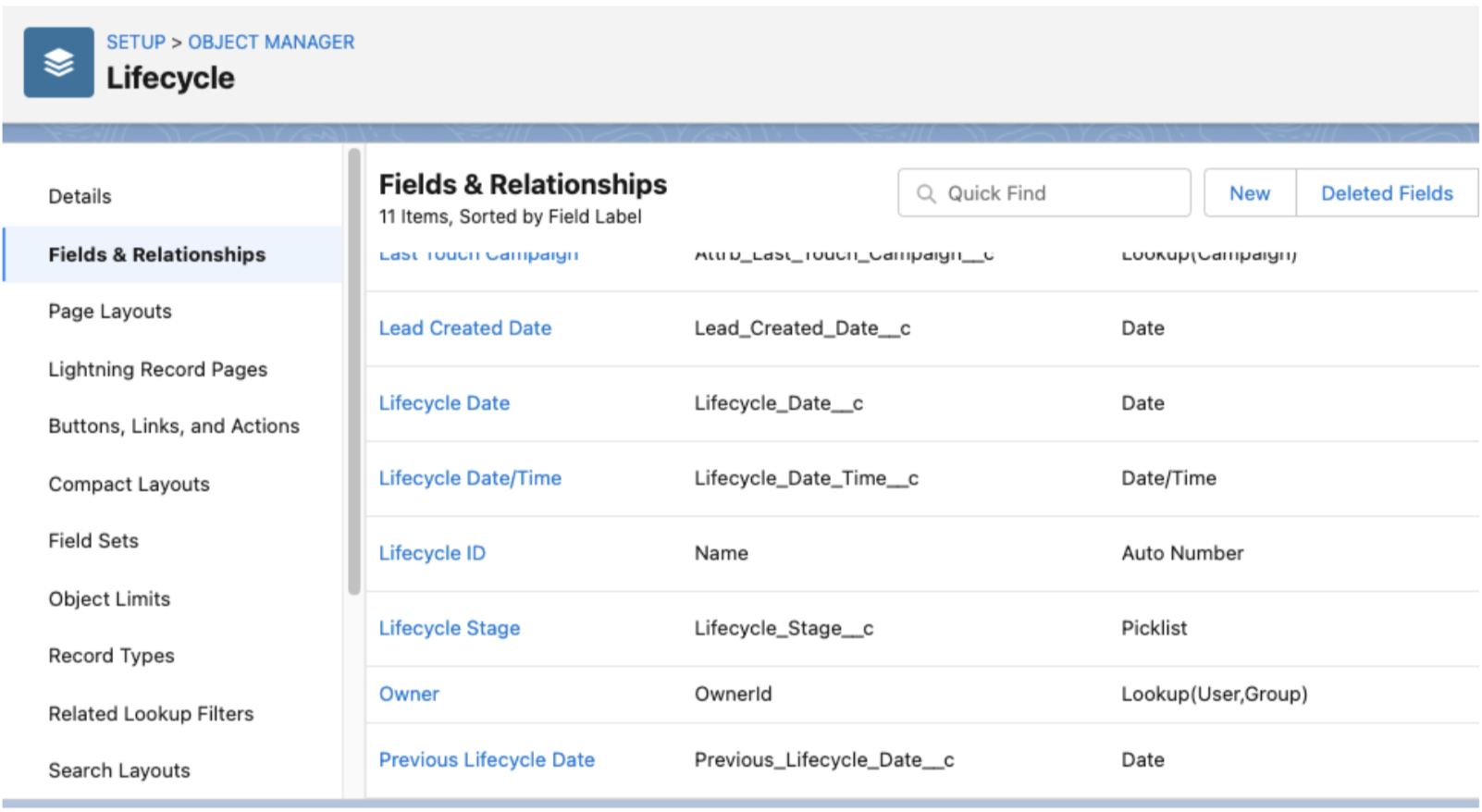 Having lifecycle stages as a mechanism in your org allows teams to understand the rate of conversion between each stage. Is there a dramatic shift in part of the funnel where there really should not be? Obtaining this insight can identify when a company has a leaky funnel and analyzing the conversion rates can then better inform the team of what processes they need to improve to foster better conversion.

As a reference, FirstPageSage did a study on the B2B SaaS Funnel Conversion Benchmarks. Their report is broken down by marketing channels, and industries. Once your company’s baseline data is understood you can compare your conversion rates with the benchmarks of other companies into your segment.

Once the Lifecycle Stage Custom Object is implemented, the next step is to add date fields for each lifecycle stage to timestamp the moment when a lead advances to the next stage in the funnel. Producing the velocity metric, the delta between the date from when the lead entered a stage to when they enter the next stage. Understanding the full funnel velocity empowers teams with insight into how long it takes for a lead to advance from Prospect to Customer. 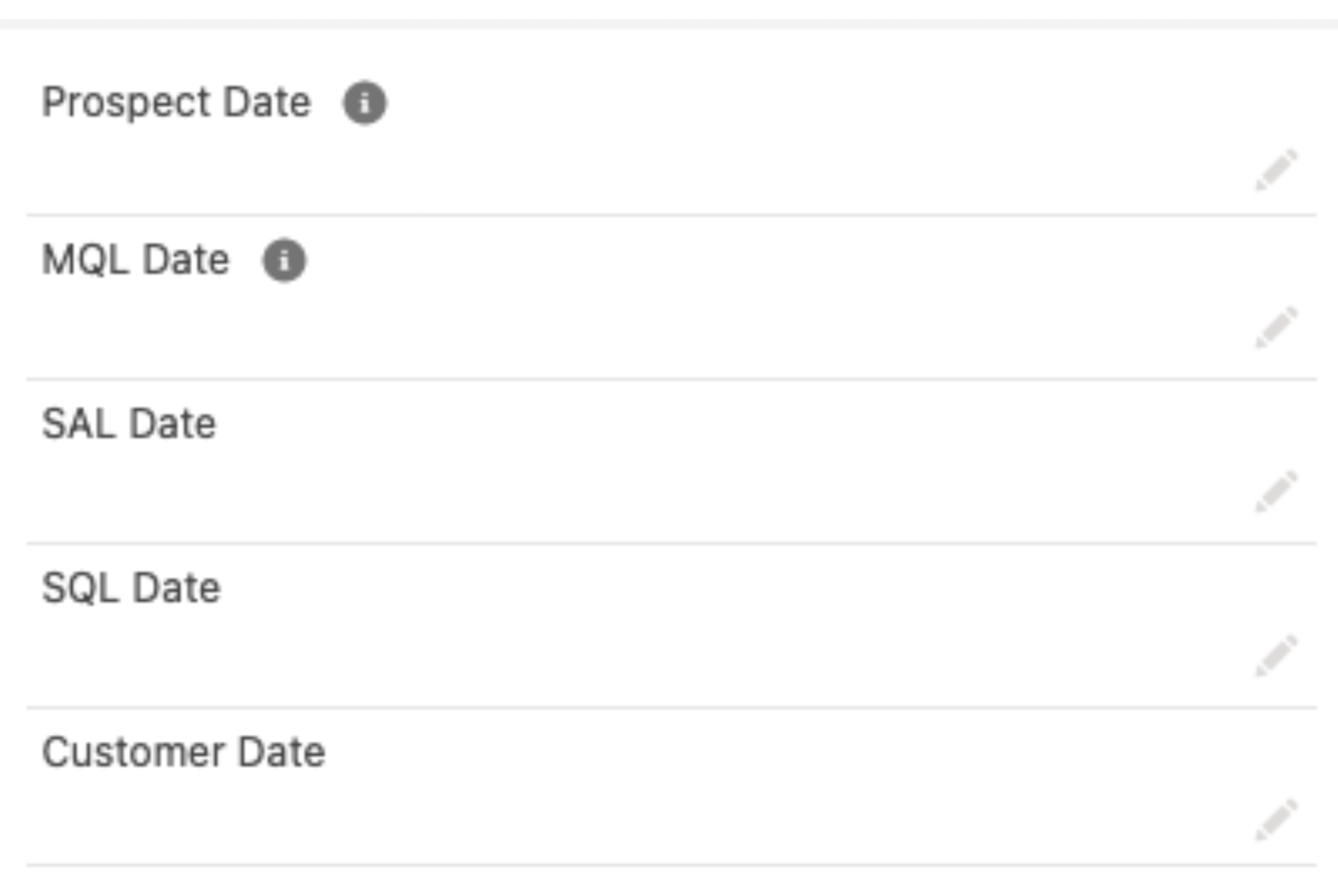 Tracking the funnel velocity empowers the team with baseline data, so that when changes are made with marketing and sales processes with the goal of accelerating the funnel, they have a before and after measurement to refer to, so that they can objectively answer the question of whether or not they have actually accomplished their goal.

In addition to having baseline data, funnel velocity data assists with forecasting and informing the team when they need to pivot to reach their revenue goals. For example, if the team is behind on their goal for the quarter, and marketing knows that certain campaigns, such as a webinar, will drive leads through the funnel faster, they can then run a webinar to meet their goal.

After lifecycle stages and funnel velocity tracking have been implemented, teams can focus on automating key transition stages in the funnel as leads progress from one stage to the next to foster funnel acceleration and observe the before and after impact.

Depending on your funnel, there could be several key transition stages and ones that will have more impact when the process is improved than others. The big three that Craig shared are as follows.

MQL to SAL – The Marketing to Sales Handoff

As mentioned earlier an MQL is a prospect that has met a certain threshold, using a combination of their buyer profile and their level of engagement. The first step is to automate your lead rating using the functionality of your marketing automation system, for example, with Pardot, grading and scoring.

The second piece of automating the handoff is to streamline the lead routing process, moving away from an individual manually overseeing a queue and sending leads to the relevant team member. This can be done with Salesforce Process Automation, using lead data fields regarding industry or geographic region depending on if your sales team is split up based on vertical or territory.

Automating these two pieces of the handoff allows for sales to be able to accept leads faster which then results in quicker follow up, resulting in better conversion rates. Chili Piper referenced that businesses who respond to leads in five minutes or less are 100x more likely to connect and convert opportunities.

Once sales has accepted the lead and they open an Opportunity to convert the lead to an SQL, there are several processes within the sales cycle that can be automated to shorten the overall time, thus accelerating the funnel.

Leveraging automation to accelerate these aspects of the sales process will then help lead to faster overall funnel velocity.

Whether it is an automated email that is sent to the customer once they sign the contract with a booking link for their project kick off call, or just a greeting from their dedicated customer success or project manager, have a process in place for the handoff between sales and customer success.

Doing this will help to round out the funnel and allow for an overall better customer experience, allowing your team to start out in the right direction with the customer engagement.

Accelerating your funnel results in more conversions which means more closed won deals. Making optimizations to the processes within each lifecycle stage allows you to increase revenue with the same amount of resources that you had before.

To hear the full conversation between Craig and Lucy, access the LinkedIn Live recording here.