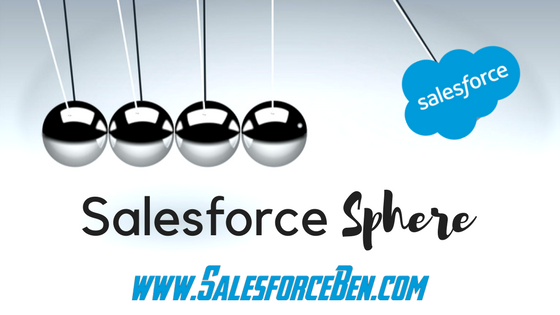 A US-based Salesforce Geek and owner of sf9to5

The month of March certainly seemed to go on for a while and as a result came with many updates in the Salesforce Sphere. To start, Salesforce announced a new strategic partnership with DropBox centering around creating a two-way flow of data between the two platforms. Following that, Salesforce announced a major acquisition of Mulesoft. And if that wasn’t enough news for March, we also had TrailheaDX which of course brought lots of fun and exciting new things to the surface. Lastly, and possibly most importantly, Appy turned 1! Happy Birthday Appy!

Right after the announcement of the acquisition of MuleSoft, one of the biggest integration platforms out there, Salesforce released their new Cloud called Integration Cloud. This new cloud was demonstrated during the keynote speech at TrailheaDX and is basically the “click-not-code” way to be able to easily integrate 3rd party applications with Salesforce. Salesforce also released some new Trailhead modules to go with it. It will be exciting to see where this goes!

I found this article had apt timing since Salesforce just released a new Superbadge for App Customization. This article by Brenda Finn from Opfocus takes you through some excellent pointers, especially around the development based Superbadges. The most important one I think is KISS – Keep It Simple Silly – Salesforce is trying to make sure you learned a specific thing, not 10 things at once, so don’t go overboard when working through these badges. Have fun on Trailhead!

Salesforce: Action in Lightning to replace URL Hacks in Classic

This is short but necessary how-to for anyone who is planning or in process of moving to Lighting. It takes you through how to move your URL hacks used typically in a class for a “clone” with values already populated, and turning them into Actions, which are Lightning friendly.

While you may already be reading this after April 1st, I think that anytime in the first couple weeks is safe to pull an April Fools day prank. Here, the Accidental Admins give us a few clever ideas that you can pull on a colleague or a boss, that hopefully won’t get you fired (of course try at your own risk). I think that this could be a fun way to kick the spring season off with a good laugh!

One of the key takeaway themes that I found from TrailheaDX this year was all about automation, testing and DevOps. Algoworks pulls together a quick top 5 list of their choices for tools for testing. They range from Open Source/Free to paid and covers many different types of solutions depending on the needs of the company. If you are interested in reading about testing tools or looking into DevOps I highly recommend this post.

March was a busy month, but April will be just as busy. There are all sorts of world tours going on, including Boston and NYC. Make sure to check out where your local tour might be! A couple of other items that I wanted to mention. Get it before it’s too late! A special TrailBed  (yes you read that right) badge, that you can only get till April 9th – this will also put you in the running to win some awesome Astro bedding! Lastly, I think most wonderfully, Salesforce is migrating all certification maintenance exams to Trailhead, and as they move there will no longer be an upkeep fee! Check out the dates here for more information.