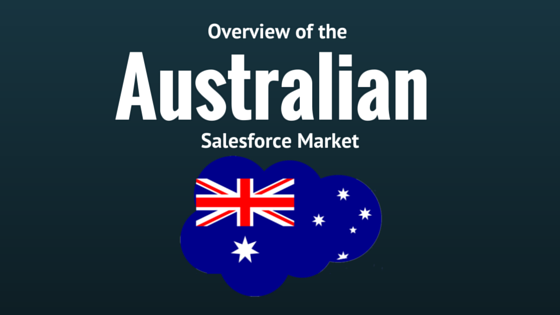 Nathan is a Kiwi who is a specialist Salesforce recruiter and has successfully placed Salesforce experts into the following countries - Australia, New Zealand, US, UK, Ireland and France

Having moved from New Zealand in April and arriving into London in June, it didn’t take long for me to realize the scale of the Salesforce market in the UK and Europe.

I first heard of Salesforce in 2008 when a customer said, “it’s the way of the future, and it’s going to be massive”. He was so passionate and excited about being able to chat to CIO’s / CEO’s about what it can do. He was pretty much bang on. When it comes to CRM solutions Salesforce is King.

The Australian Market like the UK, continues to grow with some consolidation going on at the same time. We are seeing Salesforce put more and more energy into Australia as we observe new Salesforce Consultancies popping up due to the demand and hype around what the Salesforce suite can do.

Partners – You have the global Salesforce Partners such as Accenture, Capgemini, and Bluewolf playing in the Australian market alongside some more “local” organisations such as System Partners, RXP Services, Tquila ANZ, SMS Management, DataColada, Morphate, ProQuest, SalesFix and Sqware Peg.

End Users – There have been some significant projects going on in the Salesforce space with the likes of “MyServiceNSW” going live. This is a customer service portal run by the New South Wales government. In short it is a “one stop shop” for all government agencies in New South Wales (Sydney).

Another big project, which will kick off shortly, is one with the NSW Family and Community Services as they announced that Salesforce is the prime vendor for the $100 Million project to revamp the ChildStory program. I have yet to hear whom the main Salesforce Partner is to work on this project.

There have been some other notable pieces of work such as Cochlear.

In the banking space we have seen CBA implement Salesforce and Macquaries continue to forge ahead in implementing Salesforce.

How do I work in Australia?

Like it is in the UK, if someone from outside Australia or New Zealand wants to work in Australia on a permanent basis they typically need to get a sponsorship. This is via a 457 Visa, which is an employer sponsored visa (not to dissimilar to the UK Tier 2 work visas).

Many of the Salesforce Partners will do this for candidates that have skill-sets in demand:

Or if you are under 30 you can get a Working Holiday Visa, which will allow you to do some contract work but won’t allow you to take up a permanent role. You will need sponsorship for that (see above).

What can I earn?

Previous Post: New York World Tour Opening Keynote
Next Post: What to Consider When Creating a Customer Portal for Salesforce?

2 thoughts on “Overview of the Australian Salesforce Market”