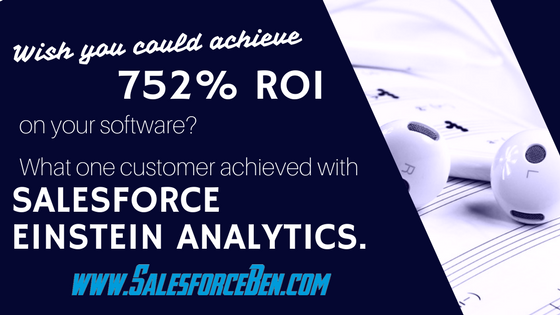 The Nucleus Research Technology ROI Award winner for 2017 was consumer music app Shazam – but they’re not the real showstopper in my eyes.

The award, now in its 15th year, is the brainchild of Nucleus Research, a firm that provides the “ROI, insight, benchmarks, and facts that allow our clients to understand the value of technology and make informed decisions.”[1] Their Technology ROI Award is known for bringing the world’s attention on obscenely high levels of ROI on software implementations; the figure that topped this year’s leader board was a return of 1566%!

Back to focusing on Shazam. Following their implementation of Salesforce Einstein Analytics they were able to rake back 752% on what they initially invested into the tool, through direct sales revenue and indirect operational value. What’s more, it only took them just over 1.5 months following deployment to accumulate back their spent money – that’s a very rapid payback time!

Out with the old…

As mentioned above, Shazam are a consumer music app, most famous for its ‘music queries’, being able to detect surrounding music, captured by users as an ‘audio fingerprint’, and then matching to listings on music sites, such as iTunes. When it was first released, it was considered cutting-edge technology in the palms of the public.

It is, therefore, fairly shocking that this organisation were previously managing sales performance on standalone spreadsheets, aided by a disparate analytics tool. It only took a small slip for an erroneous dataset.

Guess how many ‘music queries’ they process a day? 20 million+.
All of this data being captured, not fully integrated with a sales cycle? Companies that host these kind of services are in a privileged position, able to leverage their data-rich operations for up- and cross-selling. Luckily, the new deployment does just that.

…in with the new: Einstein Analytics

Einstein Analytics is part of an AI-powered technology layer that spans the whole Salesforce Platform. Reporting has always been cited as a core strength of the Salesforce platform, because it allowed users to manipulate CRM data through drag and drop building tools. But, who has time to extract insights (correlations & trends), when it can be done by AI?

One feature, Einstein Discovery takes data insights a step further to what’s termed ‘Actionable AI’, providing the end user the next best actions based on masses of historical data and predictive calculations.
Einstein now has use cases for each one of their ‘clouds’ (ie. business function specific products), but the Analytics piece is undoubtedly one that holds the trophy.
In Shazam’s case, the platform had a number of reported benefits:

– Ability to slice and analyse data, eg. region-by-region.
– Self-service reports for sales
– Easy data consolidation for analysis (because it prevents data from becoming dirty)
– Described as ‘budget friendly’ (this is, of course, subjective).
– Got the thumbs up from the chief revenue officer (CRO), sales VPs and business intelligence team – a cross-functional      gain.

Shazam also saw the indirect benefit of team productivity and retention, because of the insights employees were able to put into action. A pleasant value-add to discover!

Although Salesforce has been renowned for reporting high levels of customer ROI, the ROI and payback time in Shazam’s case is exceptional. I think this will lead to many more enterprises rushing to get on board with AI-powered sales analytics – these benefits are not speculation, but they’re fact.