Salesforce are well on their way to hit the magic $10B in revenue this year, but this isn’t the only part of Salesforce soaring this year. Earlier this month, Salesforce Tower in San Francisco celebrated it’s capping ceremony, an event whereby the last beam is set into place – casinobonusgambling.com. Salesforce Tower is a fantastic physical representation of the companies success since the company was founded in 1999 out of a small apartment upon Telegraph hill, just under 2 miles away. As usual, Salesforce does nothing in half measures, and this tower is no exception as you will see with some of these facts!

A little fact you may have already suspected, Salesforce Tower is the tallest building in San Fran. In fact, it has surpassed the previous record holder, The Transamerica Pyramid, by 216ft! Meaning that the Tower really does soars above the San Francisco skyline in a truly outstanding fashion. The Tower has not only grasped the record in its own city, but is now the tallest tower west of Chicago!

Salesforce employees are currently spread around San Francisco in various offices due to the large workforce. But when the Tower is completed, which is currently estimated for Summer 2017, all employees will most likely be moving into the Tower. Benioff has said that at the end of the year, the Tower will hold 10,000 Salesforce Employee’s, which is a 1/3 of the global workforce! 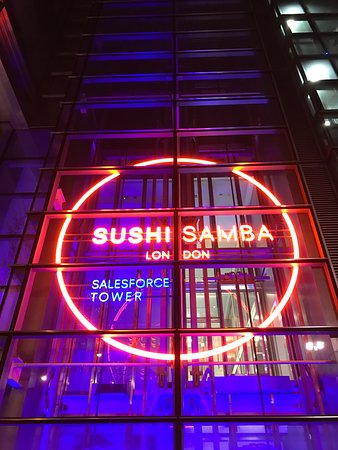 Although this may be the tallest “Salesforce Tower” in the world, it’s not the first. Back in 2014, Salesforce became the largest tenant of Heron Tower, the 3rd tallest building in London. As part of this 15 year deal, Salesforce also struck naming rights to Heron Tower, but this wasn’t without some controversy. When the announcement was sent around, a few of the tenants thought this was a belated April fools joke! One tenant, POWA Technologies, responded by saying they would have not moved into the building knowing it would be renamed after their biggest competitor. Despite Salesforce offering to pay for any stationary or website changes, the tower is now officially known as 110 Bishopsgate. However, for most visiting the tower for the first time, it very much appears to be part of the Salesforce Brand.

Benioff has been asked whether he is reserving the top floor for this office, but the truth is it’s going to play a very different role in the building. The tower’s 61st floor will not be used as office space, but will be kept as an open space to be used as a meeting area during the day, and an event space during the evening. The floor will be named the “Ohana” floor which means Family in Hawaiian, a major part of Salesforce’s company culture.

“The entire top floor is empty, and that’s really all about our ability to give back to others,” Benioff told Inc. “Religious groups, nonprofits, NGOs, and schools will also be able to use that floor when we’re not using it.”

Salesforce purchased the naming rights in a deal with the buildings developers, Boston Properties, when they signed a 15 and a half year lease that is worth around $560 Million. Salesforce themselves will be occupying the bottom 30 floors as well as the top two floors. Other tenants that have leased the building include CBRE and Bain & Company, Platinum Partner Accenture have also leased space in order to be close to Salesforce for their strategic relationship.

6. Most Expensive Building In San Fran

The Capping Ceremony for Salesforce Tower was attended by Salesforce CEO, Marc Benioff, San Francisco’s Major, Ed Lee, as well as spiritual figures from all over the city. The ceremony is one of the oldest traditions in construction, and involves hoisting the last beam with signatures from attendees of the event to the top of the tower. Spiritual leaders attended for an interfaith blessing, this included figures such as archbishop Savatore Cordileone, SF Muslim Community Center’s Imam Abu Qadir Al Amin and Zen priest Jisan Tova Green of the SF Zen Center. “It is fundamentally an act of optimism, comparable to a pyramid or an obelisk, marking a new place on Earth that’s reaching for the heavens.” described  Fred Clarke of Pelli Clark Pelli.

If Salesforce Tower seems impressive from this post, wait until you see it in the flesh! Back in February an amateur videographer flew his drone up, around, and above the tower, giving incredible views of the San Fran city scape. Although beautiful, this video is slightly illegal given the drone laws in populated areas, so definitely do not try this one yourself!