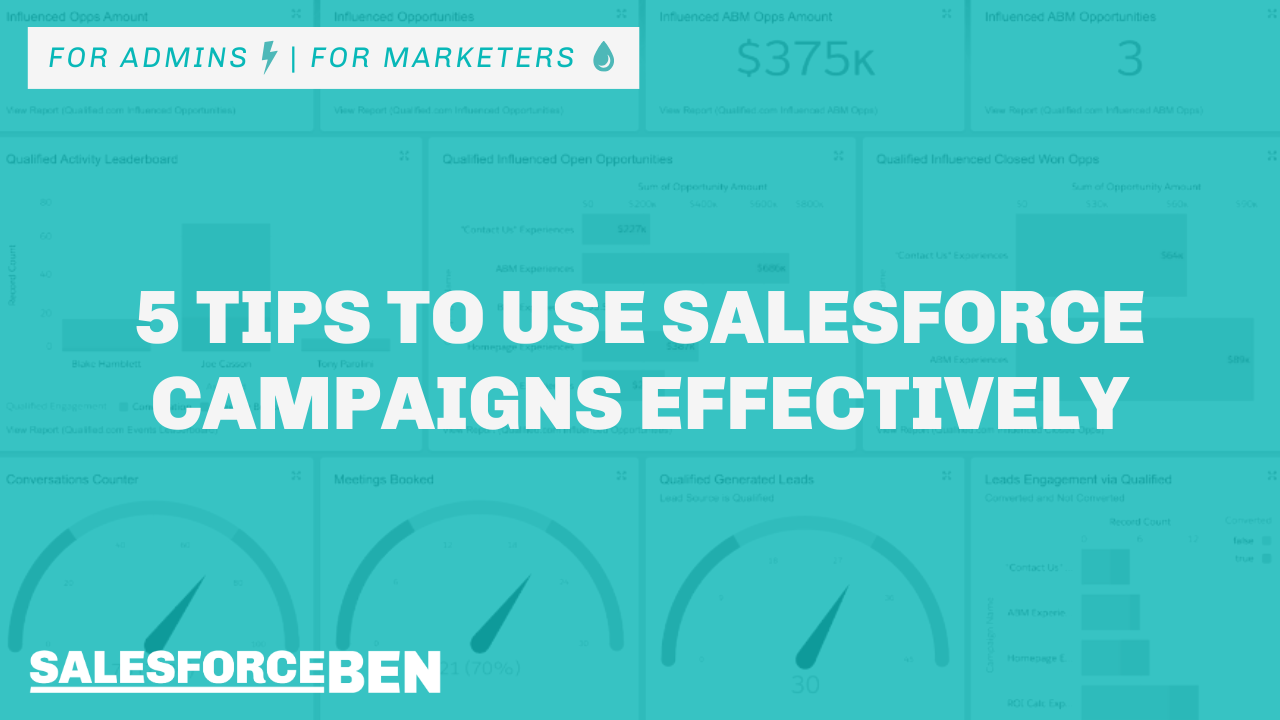 Salesforce Campaigns are one of the most under-utilised objects in Sales Cloud. As a marketing automation enthusiast, Campaigns come top of my favourite features! I’ve seen many Salesforce orgs that either have no Campaign records, or at the other end of the spectrum, have thousands of campaigns, some probably dummy, auto-created campaigns from various marketing automation connectors. My guess is that this is attributed to a lack of education, and the fact that there is no pressing use cases to use the object straight away.

The most basic way to describe the Lead Source field is as a Salesforce picklist field which records where leads came from. It will indicate which lead generation channels produced the greatest number of new leads (also known as ‘first-touch’ reporting).

Trying to squeeze the functionality of the Campaign object into the Lead Source field is the biggest mistake I see.

If you have seen a fair number of Salesforce orgs (especially older orgs), it’s likely that you have seen a Lead Source field bursting with a mismatch of values (like the image on the right). There’s no consistency between high-level channels (eg. Tradeshow) to specific marketing initiatives (eg. Tradeshow 2014). This is a big no-no! If your organisation does this, you should make it a priority to stop this abuse of the Lead Source field!

Campaign history = many-to-1: many campaigns can be related to one lead.

This brings me on nicely to the second tip about how leads are related to campaigns.

Technical note: Campaign Members is a junction object that allows you to connect multiple Leads and Contacts to many different campaigns, the Campaign Members object itself is a child object of Campaigns. 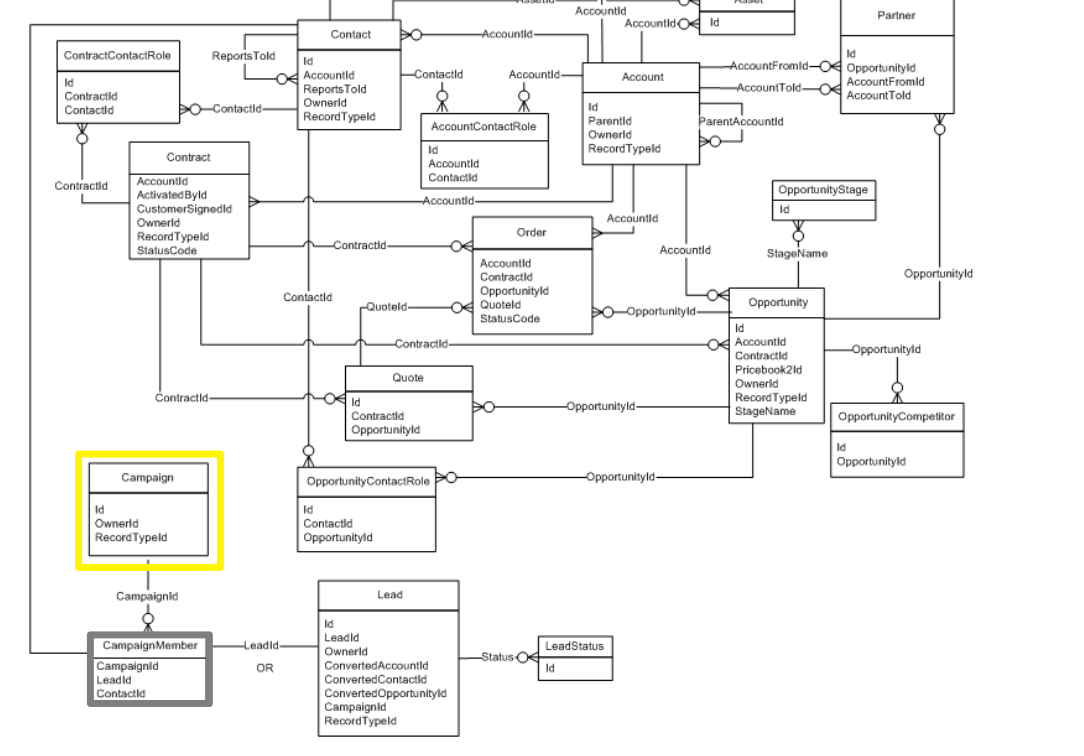 Campaign Members have a ‘Member Status’, which describes the level they have engaged with a Campaign.

The default statuses pre-populated on each new Salesforce Campaign are:

You can modify and add statuses that best match your campaign touchpoints – for example, you might have a status for ‘Downloaded PDF’, or ‘To be contacted’ if they submitted a contact form. 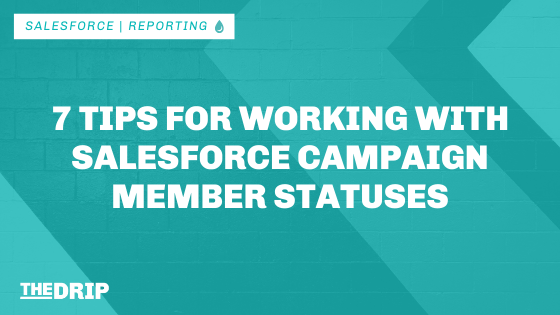 Salesforce Campaign Influence is how Salesforce Opportunities are associated to the Campaigns that helped generate them. It’s all about joining the dots between sales revenue (stored in opportunities) and marketing data (stored in campaigns) – and therefore, the fundamental connection in measuring Marketing ROI (return on investment).

Campaign influence reporting and what’s known as ‘multi-touch attribution’ paints the whole picture of your prospect’s interaction with the marketing campaigns you are running. This feature does rely on using campaigns for every marketing initiative (so some discipline!) and using Opportunity Contact Roles. Once you have these processes nailed down, accurate Campaign Influence is the graduation from limiting Lead Source tracking, to full-blown reporting.

I recommend you read the full guide to understand how Campaign Influence works – the ’nuts and bolts’! 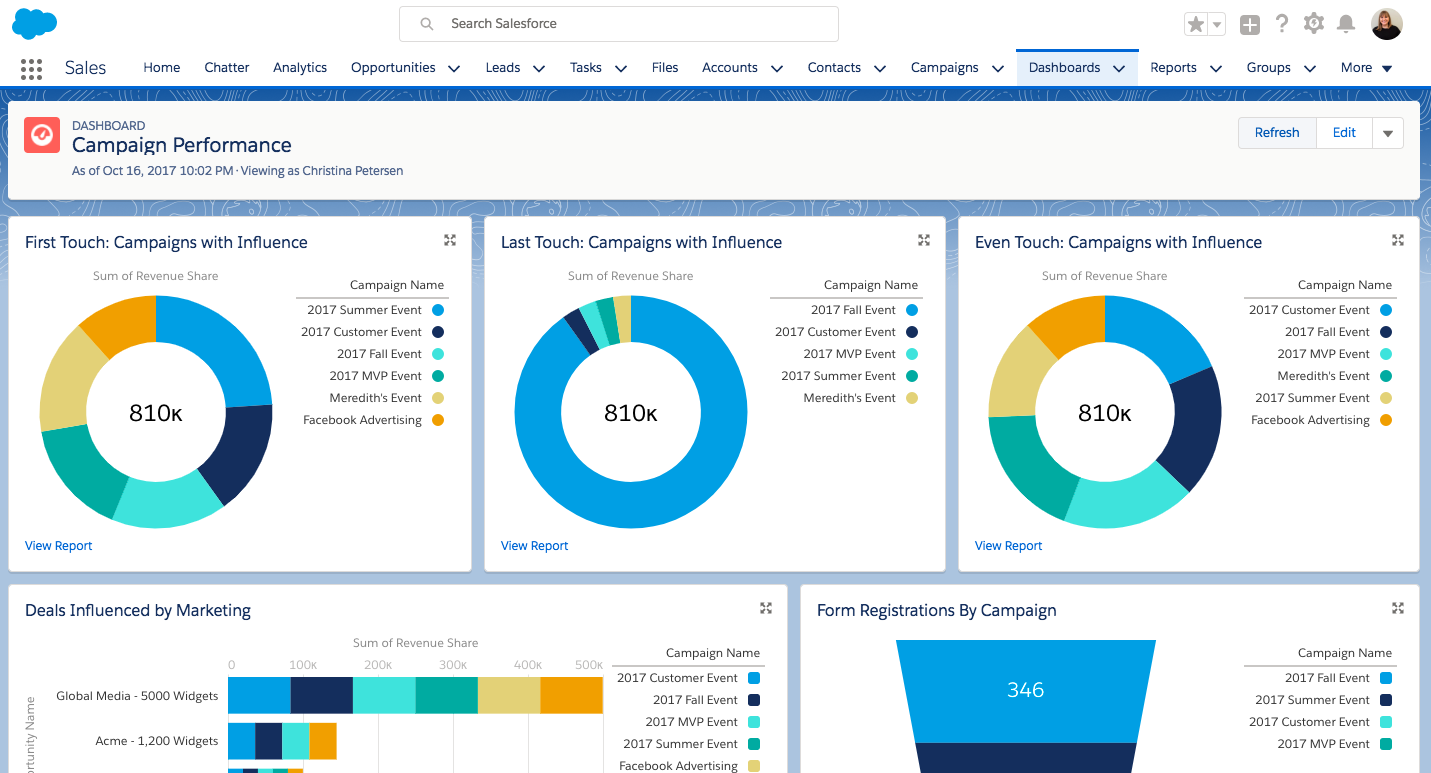 t’s about time we spoke about Campaign Hierarchies! Campaigns can be organised in a hierarchy structure, which groups different tactics involved in a campaign (child campaigns), rolled-up to one umbrella campaign (the ‘Parent’ campaign).

You could think of Campaign Hierarchies as a tree; the roots grow into branches, that split off into many leaves. 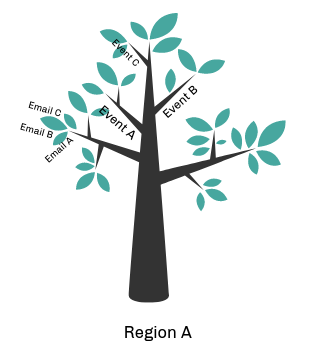 Deciding how to organise your Campaign Hierarchy starts with figuring out how the structure will cascade, top-down. It’s often a decision that takes time to discuss (often with some healthy debate) because there is no right answer! One thing I am sure of, however, is that once you’ve planted your tree, you can’t suddenly uproot it, or swap the branches for the leaves! (Without great effort, of course).

This is how a typical Campaign Hierarchy looks in Salesforce:

One of the greatest advantages of Campaigns is reporting capabilities. The data that Campaign Influence is collecting automatically is invaluable. This type of data enables the marketing team to see which Campaign are effective and exactly the output that they are producing. Where are the gaps in the process? Maybe Marketing is generating the Leads, but Sales are not closing opportunities, or it is the opposite way around?

On the campaign itself, you can view these default campaign fields for reporting:

These fields report on the campaign with equivalent fields for ‘in hierarchy’, meaning the total for all the campaigns related together in the hierarchy, eg. ‘Total Num Sent in Hierarchy’, ‘Total Value Won Opportunities in Hierarchy’. You can add both of these to the campaign page layout, if you wish, or just add them to reports to keep your page layouts clutter-free. 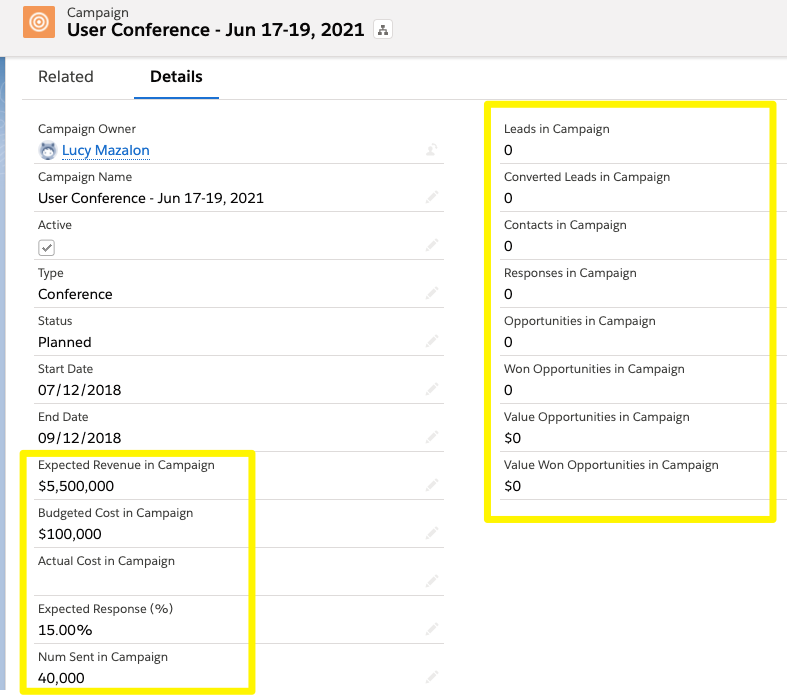 If you’re a Pardot customer, take a look at ‘8. Campaign Engagement History Metrics’ in this post.

Salesforce is loved for its powerful reporting capabilities. A number of reports are available out-of-the-box: 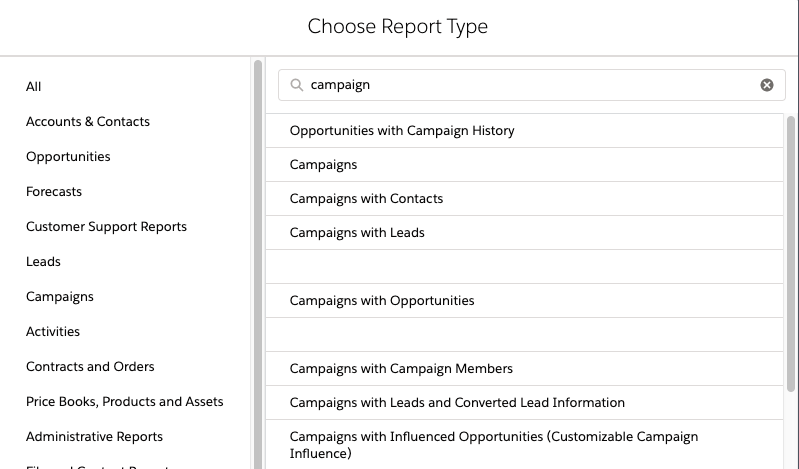 These should cover the majority of your Campaign reporting needs.

Are you a Pardot customer? If so, keep reading.

With Connected Campaigns, Salesforce Campaigns and Pardot Campaigns have a one-to-one (1:1) relationship. Marketers only need to create and manage campaigns in Salesforce, which sync to Pardot as campaigns and are, therefore, available to link with campaign assets created in Pardot, eg. emails, forms, etc.

Check your org has Connected Campaigns enabled, and how to enable them if you haven’t done so.

Salesforce Campaigns can be used on their own and provide value to some extent. The real value comes when they are paired with a powerful Email marketing tool. Combining Email Marketing tools with Salesforce Campaigns means that you segment the Leads/Contact data in Salesforce, build the list (the campaign members), and send out email campaigns directly from Salesforce (depending on the connector your marketing automation tool of choice offers – Pardot, Campaign Monitor, Mailchimp & Dotmailer for some of the best). When the email is sent out to them, their status can be automatically updated (Responded, Opened etc).

9 thoughts on “5 Tips to Use Salesforce Campaigns Effectively”

Sign up for our newsletter to stay up to date on the latest Salesforce developments!