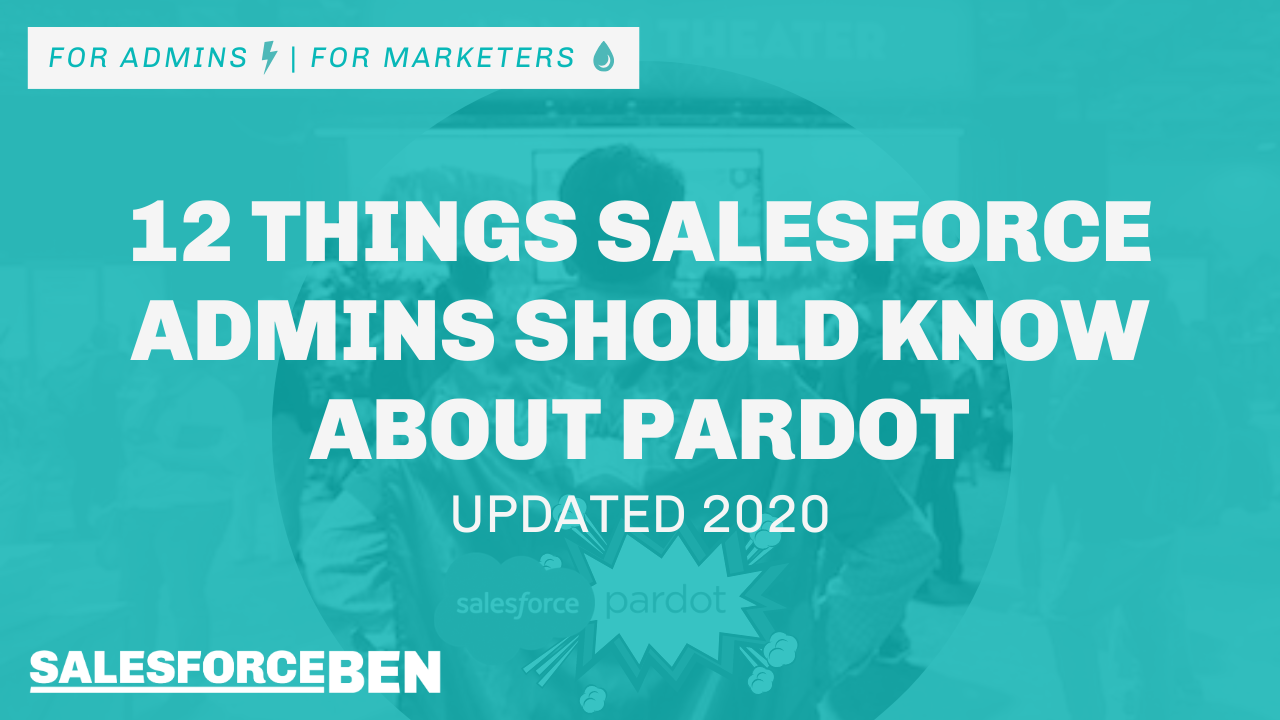 Pardot is the go-to choice for Salesforce customers looking for a B2B Marketing Automation tool. Not only is it tightly integrated to Salesforce core objects, Pardot’s reasonable price point makes it accessible to many organisations, and is appealing to new users as an intuitive tool with a minimal learning curve. From an Admin’s point of view, however, where minimal ‘under-the-hood’ is exposed, this simplicity can be a blessing, or a curse if you don’t know about the product’s limitations until you bump up against them.

Since this post was originally published in June 2017, there have been many enhancements to Pardot, that this post was in dire need of an update. You will find ‘Update yourself!’ sections throughout the post, that draw your attention to where there have been major changes since the original date. It’s funny to step back and take a look at how much has changed in the space of 2 ½ years! I hope you find this post useful in starting or continuing your Pardot journey.

1. Leads and Contacts are all ‘Prospects’

In the eyes of Pardot, all Leads and Contacts are created equal*. All of the ‘people’ records stored in Pardot are one object called ‘Prospects’.

A Pardot Prospects can be associated with either a Lead record OR a Contact record in Salesforce. CRM ID, that is, Lead ID/Contact ID, is the magic tie. Even when a Lead is converted to a Contact in Salesforce, the same Prospect record remains tied, just switching out the CRM ID to the newly created Contact ID, instead of the obsolete Lead ID.

*to an extent! See AMPSEA (point #3) for more details.

A section of a Prospect Record, with Salesforce ID fields.

In a basic org setup (without any data sharing rules imposed), there is one single pre-requisite to remember. In order to sync to Pardot, a Lead/Contact must have an email address, in the default ‘Email’ field. No email address, no Prospect record.

Access your entire Prospect database through the ‘Prospect List’, where you can use pre-built filters to quickly narrow down your selection.

‘Engagement History’ is the term for Pardot Activities that appear in Salesforce under the Lead/Contact. Engagement History could include: Email Sent, File Download, Form Success (submission), Tracked Link Clicks, amongst others.

You can add the Engagement History Lightning Component to your Lead and Contact Lightning Record Pages, and so long as there’s an associated Prospect, the activities will appear. 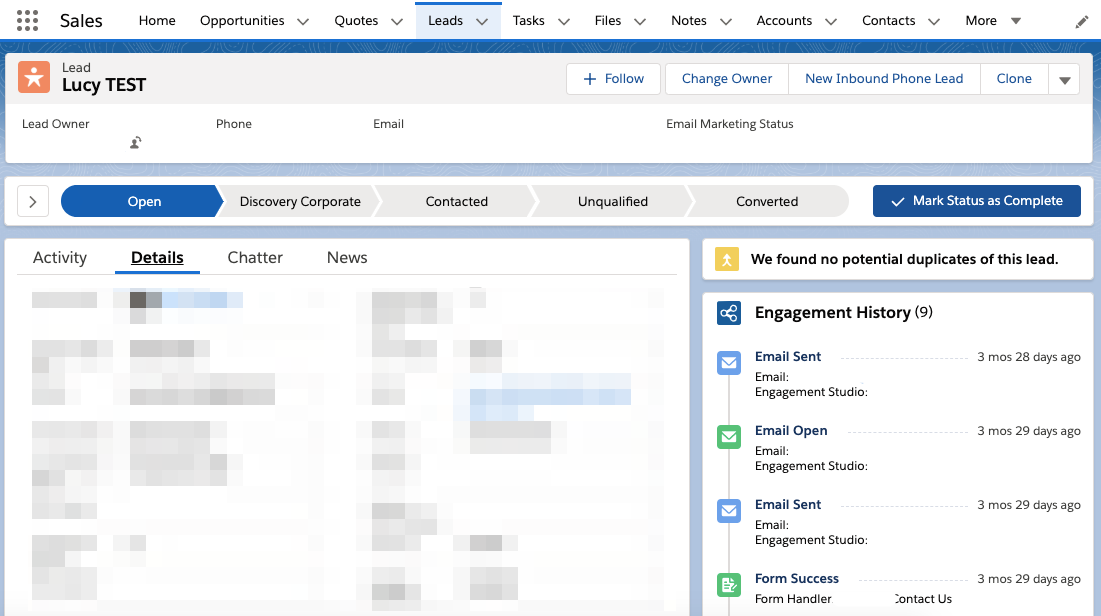 Update yourself! Previously, Prospect Activities appear in Visualforce. Now the world has moved on (thankfully), giving us a more aesthetically pleasing view. If you transitioned to Salesforce Lightning, the Visualforce would not have been switched out for the Engagement History Lightning Component; so, if you are still seeing the old Prospect Activities list, you will need to switch this out yourself.

3. Get to Grips with AMPSEA

If you purchased Pardot after June 2016, then AMPSEA has been enabled by default, and it is irreversible. When AMPSEA was released, it pleased many Admins, but received backlash from others – let’s look at why:

Be aware of how AMPSEA works, and get the low-down on all the headaches it could be causing you.

4. Pardot Campaigns are Read-only – Salesforce is the Master

Thanks to Connected Campaigns, Salesforce Campaigns and Pardot Campaigns have a one-to-one (1:1) relationship. Marketers only need to create and manage campaigns in Salesforce, which sync to Pardot as campaigns and are, therefore, available to link with campaign assets created in Pardot, eg. emails, forms, etc.

Not only is this more efficient, but it also manoeuvres teams into best practice campaign management, using Campaign Hierarchies, Campaign Influence, and ‘Multi-touch Attribution’, a term you may have heard being thrown around.

Over the past few releases, Pardot have made big moves to transform the marketing assets we manage in Pardot (forms, emails, landing pages, campaigns) into Salesforce records.

The following objects are related to the Salesforce Campaign object:

These can be added to Salesforce Campaign page layouts as related lists:

What this has meant, is that marketing assets have to sync from Pardot to Salesforce (and vice versa) through the Salesforce Connector, just like Prospect records do. Known as the Asset Sync Queue, this is where you can check if you cannot see what you expect in Pardot or Salesforce.

Update yourself! Previously, these objects didn’t even touch Salesforce, and activities were read-only, trapped in Visualforce Components (point #2).

To echo the introduction, Pardot’s simplicity can be a blessing, or a curse. One topic that spanned both was reporting. Reporting in Pardot itself in WYSIWG, and inflexible; the most you can do with it is filter the graphs using pre-defined date filters. The Pardot reports are great for a quick snapshot of one metric, eg. form submissions, email opens, but it won’t allow you to grasp a birds-eye view of a campaign.

Now there are alternatives. For one, now that marketing assets are Salesforce records, we can leverage Salesforce reports! As an Admin, you will need to set up Custom Report Types for ‘Engagement History’, like this example here.

Next level up, is B2B Marketing Analytics (B2BMA), a ‘restricted’ version of Einstein Analytics. B2B Marketing Analytics comes with a surprising amount out-of-the-box that people don’t always dig into – I recommend taking a look at this series on The DRIP that outlines what dashboards come out of the box, then goes into further customisations in later posts. If you are a Pardot Plus or Advanced customer, B2BMA is included in your package.

7. Plugins – be careful what you’re reporting on

These plugins are designed to be ‘plug-in-and-play’, but beware of what data is being attributed in the reports before sharing with your users. A good example is the Google Ads Connector for Pardot – while it is eye-opening for teams that were previously blind to lead quality coming inbound from Google Ads conversions, they are also at risk of following these metrics without being aware of what’s happening behind the scenes. Always look at WYSIWYG reports with a critical eye.

8. Pardot has different User Permissions (that can be in sync)

Pardot users can have one of the following Pardot User Roles: Administrator, Marketing, Sales Manager and Sales. If you have Pardot Advanced or Ultimate editions, you can create custom roles too.

Update yourself! Previously, users had to be set up in both Salesforce, then Pardot, then mapped with their CRM user ID. Salesforce User Sync eliminates this duplication and significantly improves security.

9. There are two Versions of the Salesforce Connector

All accounts created after February 11, 2019 will use the Connector v2.

Syncing Errors between Pardot and Salesforce can cause a multitude of headaches. These are often caused by:

Unfortunately, there’s no way to get notified about these, except by coming across one on a Prospect record. To monitor your queue, navigate to:

Salesforce Engage brings more Pardot functionality into Salesforce with the aim of enabling Sales users to utilise Marketing material in campaigns and receive alerts about what their assigned Prospects are up to. They can also enhance their email (Gmail) insight by enabling clicks and opens tracking.

Whilst it’s a decent tool for large business development teams, it comes as a separate license. The pricing on the Salesforce Engage page has always been transparent.

12. More Than Just a ‘Stepping Stone’

Pardot was Initially considered a product for the SMB (small-medium business) market, hence why many considered it a ‘stepping stone’ product for organisations to dip their toes into Marketing Automation before purchasing heftier platforms.

However, the ever-growing Enterprise-level customer base proves Pardot’s legitimacy – after all, it is a sensible choice for any organisation using Salesforce, due to the tight integration with Sales Cloud. We will only see Pardot flourish in this field in the future, with new features such as B2B Marketing Analytics, Business Units, and others.

Be sure to check in with how much you are using Pardot, and whether you are truly maximising your investment; using Pardot merely as a ‘Glorified Emailer’ is a less than ideal position to find yourself in.